It’s that time of year again when people of all ages are enjoying the warm summer days and splashing around in a pool or nearby water park. It’s also that time of year when physicians are seeing more patients with complaints of itchiness and ear pain.

In this article, you will learn the causes, symptoms, diagnosis, and treatment of otitis externa, otherwise known as acute external otitis, or swimmer’s ear. Coding for this condition in ICD-10 is also discussed.

Swimmer’s ear is quite common. According to the Centers for Disease Control and Prevention (CDC), swimmer’s ear results in an estimated 2.4 million healthcare visits in the United States every year and nearly half a billion dollars in healthcare costs.

Otitis externa is the medical term for swimmer’s ear because it is often associated with recurrent swimming (or any other type of water sports). When water, dirt, sand and other debris enter the ear canal, it can become inflamed.

Swimmer’s ear is most common in children and teens, but it can occur in adults as well. According to the U.S. National Library of Medicine, the condition can be either acute (short-term) or chronic (long-term).

Acute swimmer’s ear is most commonly caused by Streptococcus, Staphylococcus, or Pseudomonas bacteria. These germs can be found in pools and other recreational water settings, particularly in unclean water. Showering or any other redundant exposure to water in the ear can also allow bacteria to penetrate the ear. Water collects in the ear canal, the skin gets wet, and bacteria gets trapped and grows.

Other causes of acute swimmer’s ear include cuts or scratches due to cotton swabs or other small objects that are put in the ear. Fungi rarely cause acute otitis externa but are often the cause of chronic otitis externa.

Chronic (long-term) swimmer’s ear lasts longer than six weeks and may be caused by one or more of the following:

Swimmer’s ear is not contagious, meaning it cannot be spread from one person to another. 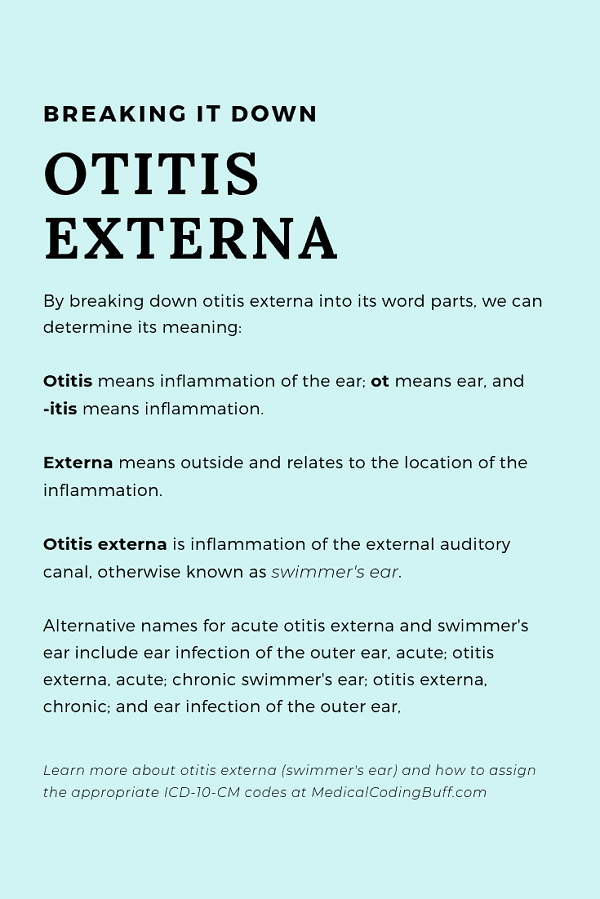 Signs and symptoms of otitis externa usually begin within a few days of swimming. They start out mild and can get worse as time passes without treatment. According to Melissa Conrad Stoppler, MD and Medicinenet, these symptoms may include:

A physician, such as a primary care physician, pediatric physician, or an ear, nose, and throat doctor (ENT or otolaryngologist), typically uses an instrument with a light on it called an otoscope to examine the ear canal. During the exam, the physician will:

If the patient is seeing a family physician and the symptoms are severe or the symptoms are advanced, the physician may recommend further testing by an ENT. The specialist will examine the middle ear to determine if that is the site of infection. This is critical since the treatment for an infection of the outer ear canal is not always appropriate for a middle ear infection.

Another reason for further testing is that the infection does not respond to treatment. In such a case, the physician may choose to take a sample of discharge or debris from the ear at a followup appointment and have a lab determine the specific microorganism causing the infection.

Note: Otitis externa is not the same as otitis media. Otitis media is a common middle ear infection that often occurs in children, but it does not usually result in pain or discomfort when wiggling the ear. 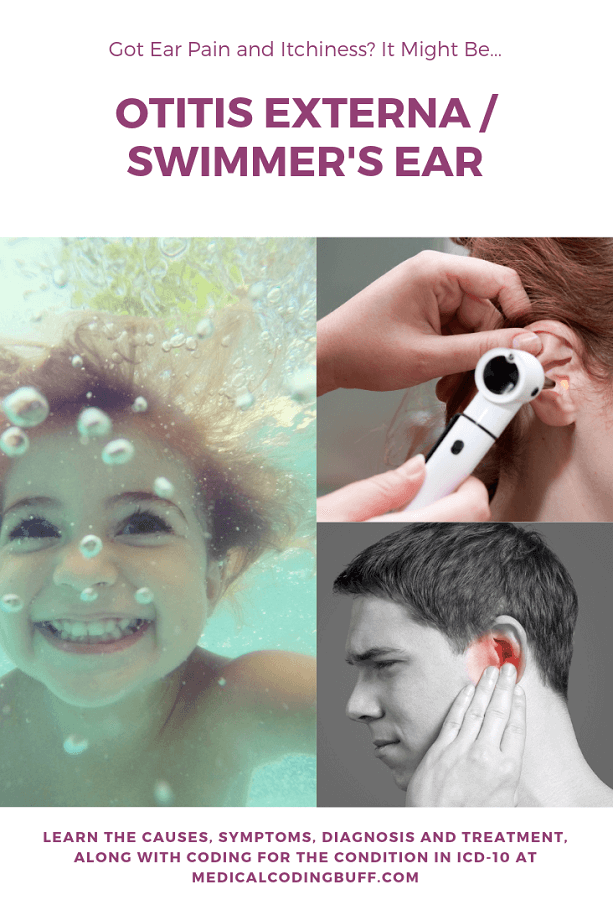 Swimmer’s ear is not usually serious, but home remedies are not recommended as they can make matters worse. Treatment commonly involves cleaning the ear canal so that prescription eardrops can flow to all the areas of infection. The most prescribed medication includes either a combination of acetic acid or antibiotic with a corticosteroid. The drops are placed in the ear canal three to four times per day for about five days.

If a person with swimmer’s ear has swelling that makes it hard for the eardrops to get down into the ear canal, a physician may insert a wick in the ear canal to help the drops go deeper. In more severe cases, a patient may require an oral or intravenous antibiotic and may have to be admitted. Intravenous antibiotics are particularly important for diabetics because the infection can become quite serious and even fatal.

According to the University of Texas Health Science Center at Houston, patients should start to feel better within three to four days of starting treatment. The infection usually clears up within a few weeks. Once the infection clears, the patient should avoid getting water in the ears for several weeks. If the patient returns to swimming, the ear can be kept dry and free of infection by inserting in it a few drops of vinegar mixed with rubbing alcohol.

Complications of acute swimmer’s ear can occur but generally do not if the infection is treated right away. When complications do manifest, however, according to the Mayo Clinic, they may include:

According to the ICD-10-CM coding manual, otitis externa codes are located in Chapter 8. Diseases of the ear and mastoid process, blocks H60 and H62, Diseases of external ear.

ICD-10-CM defines the following types of otitis externa from block H60 which include:

Otitis externa codes from block H62, Disorders of external ear in diseases classified elsewhere, are reported with H62.40-H62.43. When assigning one of these codes, the underlying disease, such as erysipelas (A46) and impetigo (L01.0), needs to be coded first.

Complete documentation should indicate the type of oitis externa and whether the condition is in the left, right, bilateral, or unspecified ear.

Swimmer’s ear is specifically located under H60.3-, Other infective otitis externa, and is broken down as follows:

I would be very careful about using an unspecified code like H60.339. Even though it may be acceptable in some cases, it may be frowned upon by some third-party payers.

Another important point: Review the notes listed at the beginning of Chapter 8 that indicates an external cause code should be assigned as a secondary code to the ear condition, if applicable, to identify the cause of the ear condition. Furthermore, there is an Excludes2 note that specifies certain conditions that should be coded along with the swimmer’s ear if they are provided in the patient’s documentation. Be sure to review this list.

If you found this article helpful, be sure to check out the related ICD-10-CM Coding Challenge on Swimmer’s Ear to test your knowledge. The answer is provided with a rationale. 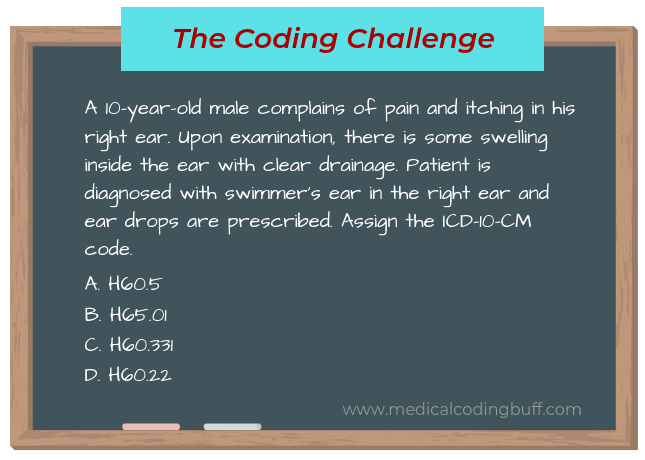