When a person comes in contact with a nonvenomous marine animal and sustains injuries, there should be an external cause code for it, right? There probably is, but we need to know certain information about the encounter first in order to assign the appropriate ICD-10-CM code.

It also helps to know what main terms to search for in the Index to External Causes and the pertinent coding guidelines for reporting and sequencing of this external cause code.

What is a nonvenomous marine animal?

Venomous marine animals, on the other hand, are injectors of venom and include such animals as jellyfish, Portuguese man-of-war, stingrays, sharks, and barracudas, according to Medline Plus.

This reminds me of a story I read recently about an incident between a diver and a whale.

According to National Geographic, a lobster diver was “swallowed” by a humpback whale. The diver stated the whale sucked him into its mouth before pushing him into total darkness. About 30 seconds later, the whale spit him back out. Following that, the diver was taken to the hospital where he was treated for soft-tissue injuries.

My first thought upon reading this story was that there are external cause codes for injuries caused by orca whales. (Actually, my first thought was that it was amazing that he survived such a horrific experience.)

External cause codes for injuries caused by an orca are found in Chapter 20. External causes of morbidity (V00-Y99), category W56 Contact with nonvenomous marine animal. These codes are classified as bitten by, struck by, and other contact. These codes require a 7th character for the episode of care:

None of these codes fit the description of what took place, however. Why? Because the diver was swallowed by a humpback whale, not an orca. An orca is a killer whale.

Furthermore, unlike orcas, humpback whales have no teeth. Instead, they use the special bristles in their mouths to filter out and retain the krill and small fish they feed on while pushing the water out through the gaps. So the diver was not bitten by the whale.

The diver did come in contact with the whale. There is no doubt about that.

A patient is brought into the emergency department. He was lobster diving when he came in contact with a humpback whale. The whale engulfed the diver into its mouth and then spit him out about 30 seconds later after realizing what it had done. The patient is examined and treated for soft-tissue injuries and released to go home. What is the external cause code for this encounter?

Finding the main term in the Index to External Causes

There are two ways to look up external cause codes in the Index to External Causes. One way is to search for the intent, such as Accident or Assault. If the intent is unknown or unspecified, code the intent as accidental intent.

The other way is to search for the causal event, such as Bite or Contact. Once we look up the main term, we must look further at the subterms. The subterms provide more specifics about the encounter.

Common Main Terms used in the Index to External Causes include:

Now that we know this, let’s locate and verify the correct external cause code for the scenario above.

To locate the correct code, go to the External Causes Index and look up Contact (accidental)/with/marine/animal W56.89. When we go to the Tabular, there are three codes to choose from:

Since the diver was taken to the hospital following the incident and was receiving active treatment, the appropriate 7th character is “A”.

So our code is:

W56.89XA, Other contact with other nonvenomous marine animals, initial encounter

Codes for other nonvenomous marine animals

If you or someone you know are ever bitten by, struck by, or have other contact with a nonvenomous marine animal (other than an orca and humpback), you can rest easy knowing there are codes for those as well:

In the real world of medical coding, the provider’s documentation should specify the patient’s primary diagnosis. If the patient sustained soft-tissue injuries, such as a sprain, strain, and/or contusion, the documentation should indicate the type and location of the injury. There may be multiple soft-tissue injuries throughout the body, which may require several diagnosis codes.

External cause codes are supplemental codes that are not required nationally. However, they are often listed with injury codes.

When assigning codes from category W56, these codes should:

As for the whale incident, I’m just glad the diver was alright. It sounds like a traumatic ordeal for both involved. 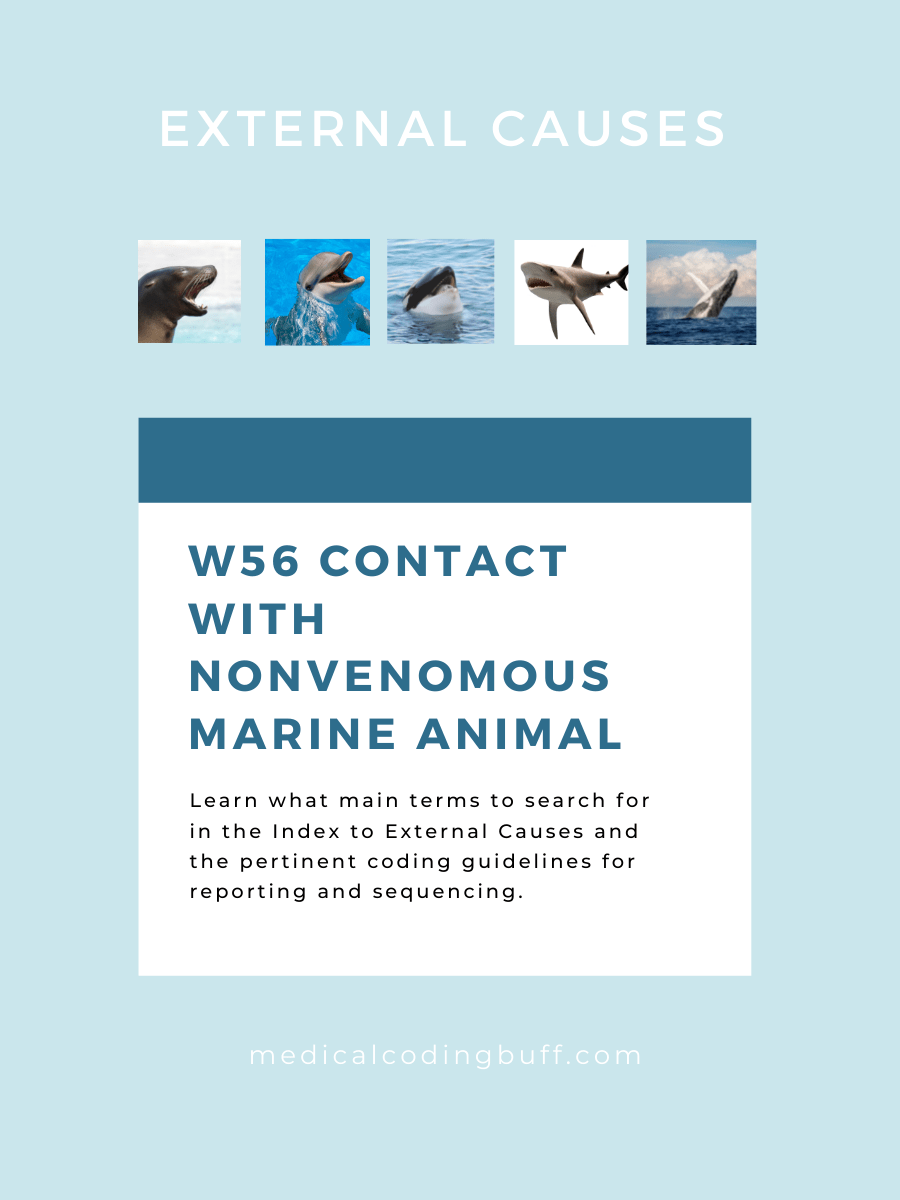