Learn how to identify hypothermia and assign the appropriate ICD-10-CM codes here. 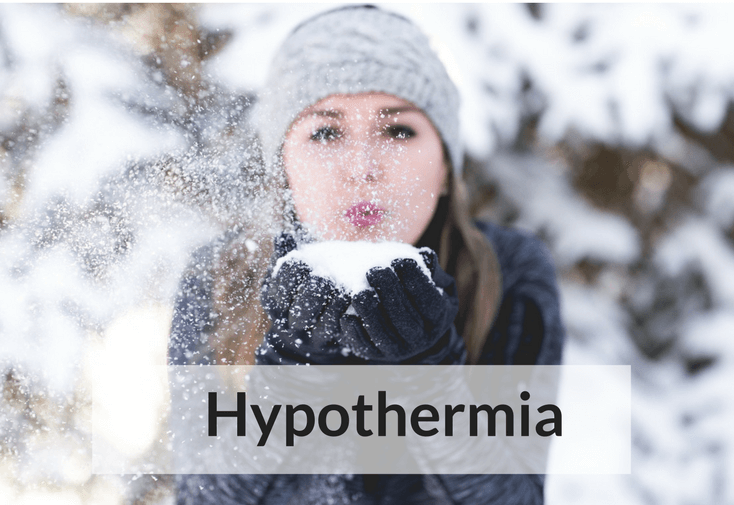 My Uncle Jim lives in Maine where the winters get exceptionally cold. Last year he needed to save some money, so he turned his heat down to 62 degrees. That decision almost cost him his life.

When Uncle Jim’s daughter, my cousin Julie, arrived at his house, he was only wearing a light t-shirt, and the house was “frigid,” she stated. Julie said her dad was shivering, pale, speaking slowly, and was having trouble walking. She wrapped her dad in a blanket and dialed 911. It turned out that Uncle Jim had hypothermia.

Hypothermia and Its Etiology

Hypothermia is a potentially serious condition that occurs when the body gets cold and loses heat faster than the body can make it. The body temperature drops to less than 96.08 °F (35.6 °C) and can be caused by cold water, getting cold in wet clothes, living in a cold home, and not having the appropriate dry clothing on for protection. Hypothermia is more common in the winter due to greater exposure, but it can also develop in milder climates.

When a person is exposed to cold temperatures, most of the heat loss escapes through the skin, and the rest is exhaled by the lungs. The hypothalamus is the part of the brain that controls body temperature, and it responds to body temperature changes by bringing them back in line.

During normal metabolic processes, the body regulates the core temperature by either creating heat, cooling, or conserving heat. Heat conservation is done by peripheral vasoconstriction and by behavior. Producing heat is done by shivering and by increasing the levels of thyroxine and epinephrine.

As the body temperature falls, the core tries to warm itself as much as possible by keeping blood away from the skin and losing heat to the environment. The blood flow is directed to the heart, lungs, kidney, and brain, and this leads to possible frostbite of the fingers, toes, hands, feet, ears, and nose. When the body temperature falls to about 95 °F (35 °C), the heart, nervous system, and other organs stop working properly. This can result in heart and respiratory system failure.

Persons at risk for hypothermia:

Medical conditions that may make it difficult for the body to regulate its internal temperature: 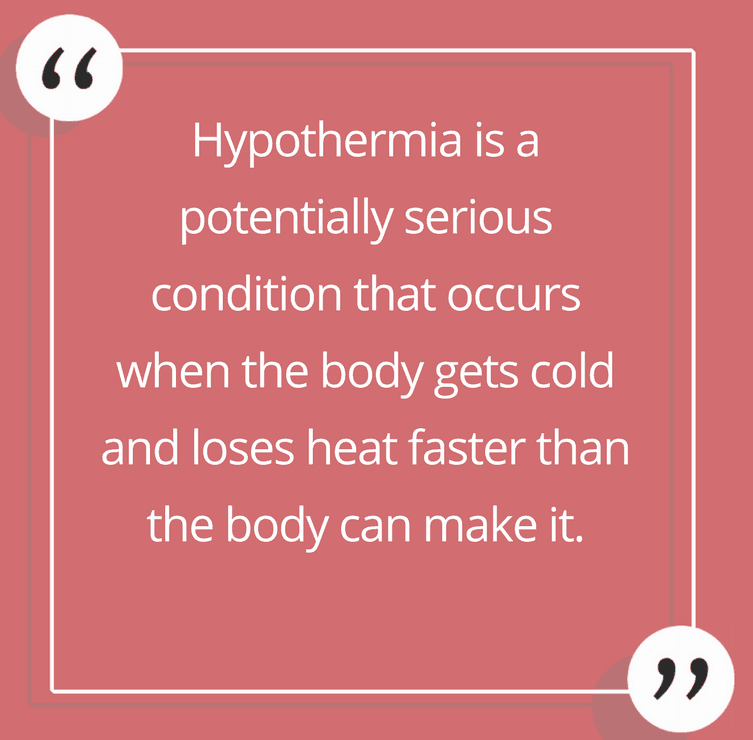 There are three grades of hypothermia, which may vary to some degree, as not all physicians agree with grading or fixed temperatures: Mild hypothermia: core temperature 90-95 °F (32-35 °C)

Due to newborns, infants, and young children having a larger surface area compared to body weight and losing body heat quicker than others, the chances of them developing hypothermia are higher. Therefore, the temperature values for hypothermia are a bit different for infants:

Infants and young children have a harder time communicating their symptoms with caregivers and medical providers. However, some of the symptoms of hypothermia to look for include:

Chronic hypothermia can occur in some infants and children, and the symptoms may include: weight loss, no weight gain, or failure to thrive.

If an adult’s temperature is taken and it is below 95 °F (35 °C), or an oral thermometer has no reading, it means medical attention is needed immediately. For an infant, it is 97.5 °F (36.4 °C). Diagnosis is made upon the patient’s history and physical exam. Diagnosis and treatment begin immediately. Bradycardia develops in some patients and is shown by an abnormal EKG.

Hypothermia is a potentially life-threatening condition that requires immediate attention. These steps should be taken while waiting for medical care to arrive:

If the person is unconscious or shows no sign of breathing, dial 911 and provide cardiopulmonary resuscitation (CPR) immediately. Continue CPR until paramedics get there. If the hypothermia is advanced, hospitalization is critical, so the body’s core temperature can be rewarmed.

Hospital treatment includes warm coverings, humidified oxygen and warmed intravenous saline, as well as internal washing of the abdominal cavity. Instilling warm fluid into the bladder is recommended in a severe case of hypothermia. Flushing the thoracic region with warm water with warmed isotonic saline is also sometimes done.

It can be difficult to determine death in a hypothermic patient. Death should not be pronounced in a patient who appears to have suffered a cardiac arrest or as a result of hypothermia until they are rewarmed to 95 °F (35 °C). 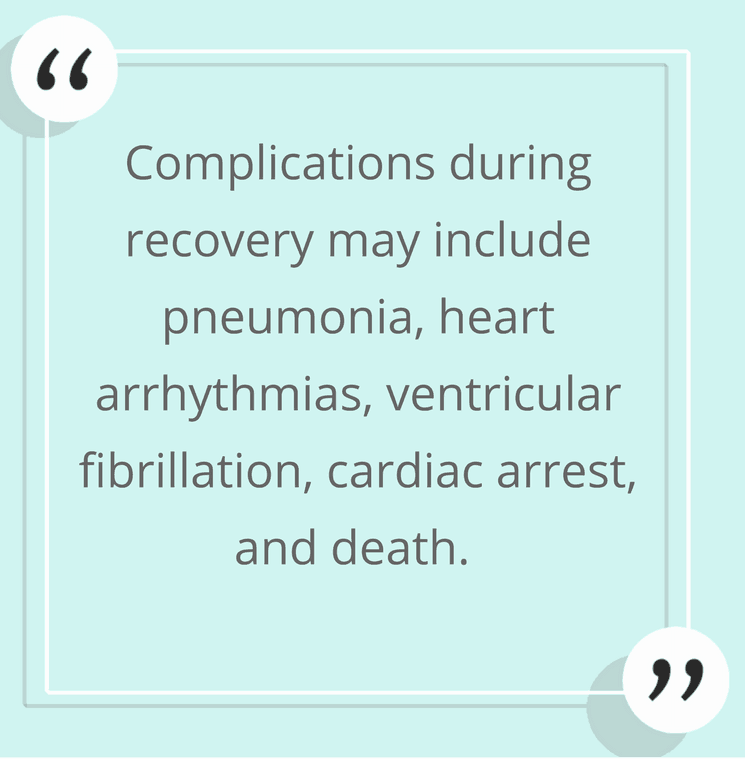 According to the National Institutes of Health, hypothermia can possibly be avoided with the right preparation:

If the condition is treated quickly, recovery usually involves little to no consequences. However, if the person has more severe symptoms and residual problems, the prognosis may not be as good.

Some people may suffer from frostbite or be more prone to developing hypothermia in the future. Still, others may have other problems, such as alcoholism, mental health problems, or be elderly or homeless, which may contribute to a worse prognosis and even death.

More deaths related to hypothermia happen indoors rather than outdoors, probably because it affects older people and the diagnosis is not made until it has progressed.

A 56-year-old female was brought to the ER after being found outside her home unconscious. Her son states the patient had been outdoors shoveling her driveway for about an hour, and the temperature was only 4 degrees Fahrenheit. Patient was wearing only a light jacket and gloves and had nothing covering her head. Her blood alcohol level was 120 mg/100ml. Patient was admitted with a diagnosis of hypothermia, superficial frostbite of bilateral ear lobes, and acute alcohol intoxication.

The ICD-10-CM codes that should be assigned are:

Now let’s discuss how we came up with these codes.

Then, in the Tabular under T68 Hypothermia, we see a few things: There is a symbol that indicates we need to use additional characters, and an “X” to indicate we need to assign 3 placeholders.  There is also a note that states, “The appropriate 7th character is to be added to code T68.” This is an initial encounter, so the appropriate code to be assigned is T68.XXXA.

The Excludes note at T68 states, “Excludes2 frostbite (T33-T34)”. This means that if the patient was diagnosed with hypothermia and frostbite, both would need to be coded. Next, we need to move on to the frostbite of the bilateral ear lobes. We already know the Excludes2 note (above) indicates that T33-T34 covers the frostbite codes, so we can go directly to those codes in the Tabular.

Acute alcohol intoxication can be found by looking in the Index under Abuse, alcohol (non-dependent), with intoxication F10.129. In the Tabular, F10.129 refers to Alcohol abuse with intoxication, unspecified. See the note that states, “Use additional code for blood alcohol level, if applicable (Y90.-).”

Be sure to read the Excludes1 and Excludes2 notes.

Going directly to Y90.- in the Tabular, Y90.6 refers to Blood alcohol level of 120-199 mg/100 ml, which is the correct code. You will see the note at Y90 that states, “Code first any associated alcohol-related disorders (F10)”. So that helps us with our sequencing.

Turning to X31 in the Tabular, we can see that this code also requires a 7th character with “X” as the placeholder, along with an “A” to indicate an initial encounter – X31.XXXA.

Did I mention to always, always be sure to read the Excludes1 and 2 notes.

Read all the instructional notes, because everything means something.

Patient is a 36-week gestational age female newborn infant, who is brought in today after being born outside of a shopping mall on a cold -11.2 °F (-24 °C) winter day in Deering, North Dakota. History showed no prenatal care had been given. The infant was found abandoned and gasping, with a heart rate of 50 beats/minute and was immediately brought to the ER. She was noted to have bradycardia and apnea, with a rectal temperature of 82.22 °F (27.9 °C). Patient was diagnosed with severe hypothermia, and intubation and CPR were immediately performed.

We have discussed the ins and outs of accidental hypothermia and how to code for it. We have also talked about how to dress appropriately the next time you plan to be exposed to cold temperatures. And if a friend or loved one shows signs of hypothermia, you will know the necessary steps to take to keep them safe while waiting for paramedics to arrive. Fortunately, my Uncle Jim survived the condition without any problems, thanks to Julie’s help and the care of the medical team.

Just talking about hypothermia makes me cold. I think I’ll go turn up the heat.

This post has been updated to reflect the FY 2020 coding guidelines. 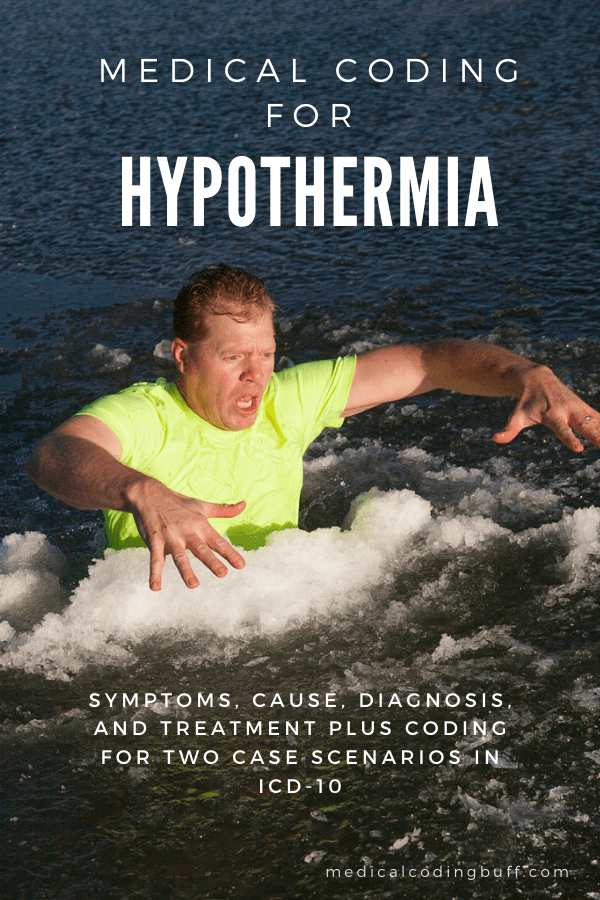 This article was first published in BC Advantage/www.billing-coding.com under the title, “Baby, It’s Cold Outside and That Can Kill You” and is reprinted here with permission.

If you found this article helpful, be sure and check out a few other links: