Learn the different types of hemorrhoids, symptoms, causes, complications, how a diagnosis is made, and ICD-10-CM coding for hemorrhoids. Three coding examples are also provided to test your knowledge. 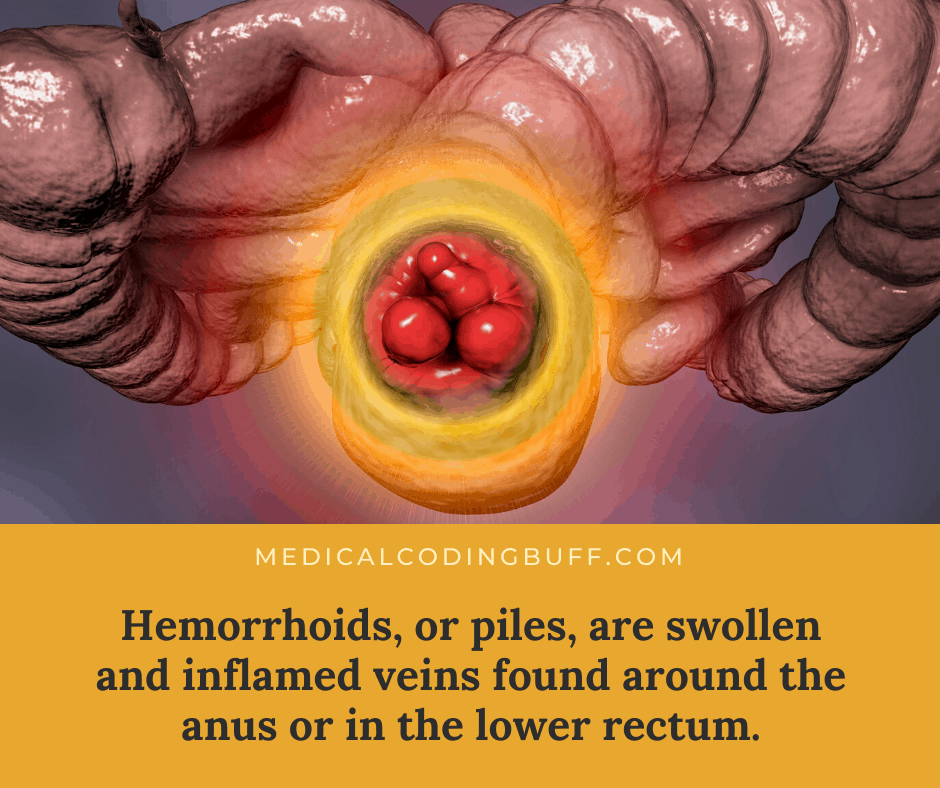 Hemorrhoids, or piles, are swollen and inflamed veins found around the anus or in the lower rectum. They are similar to varicose veins.

Hemorrhoids are a common medical condition, and they are more likely to occur as a person ages. Although rarely serious, a person may see his or her physician and be diagnosed with this condition, especially if the symptoms don’t go away or get worse.

According to the Mayo Clinic, external hemorrhoids lie below the dentate (pectinate) line and are covered by squamous epithelium and supplied with cutaneous nerves. 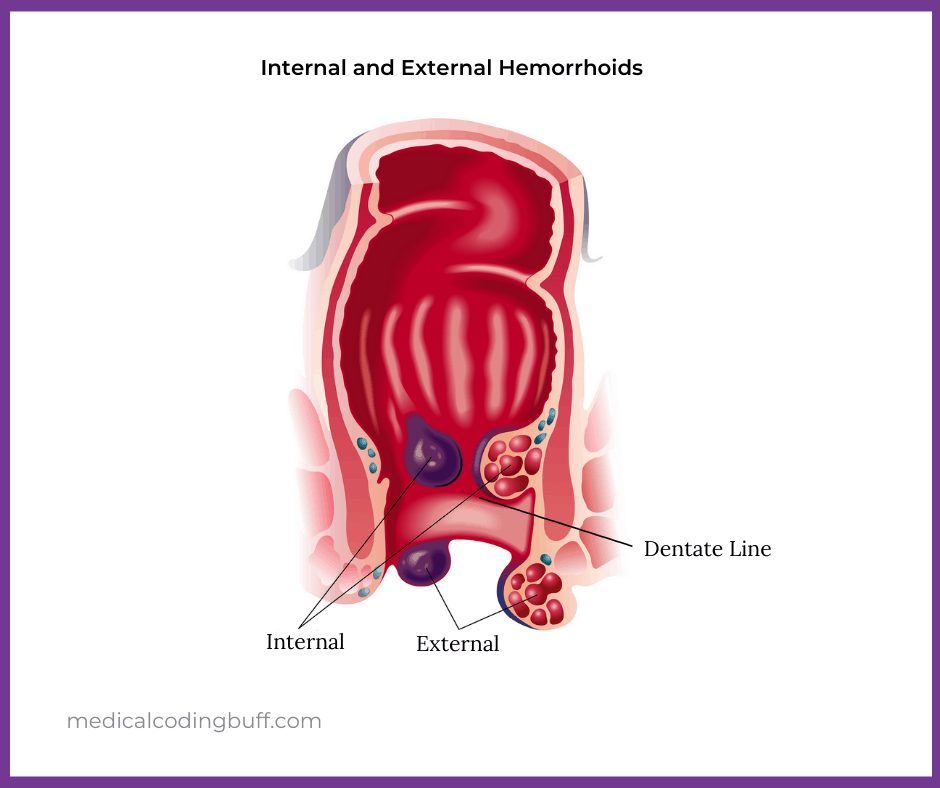 Symptoms of external hemorrhoids may include:

These symptoms may get worse if an individual strains, rubs, or cleans too much around the anus. For many people, the symptoms go away within a few days.

Symptoms of internal hemorrhoids may include:

If the internal hemorrhoid is prolapsed, pain and discomfort may occur. Conversely, a nonprolapsed hemorrhoid usually produces no pain. 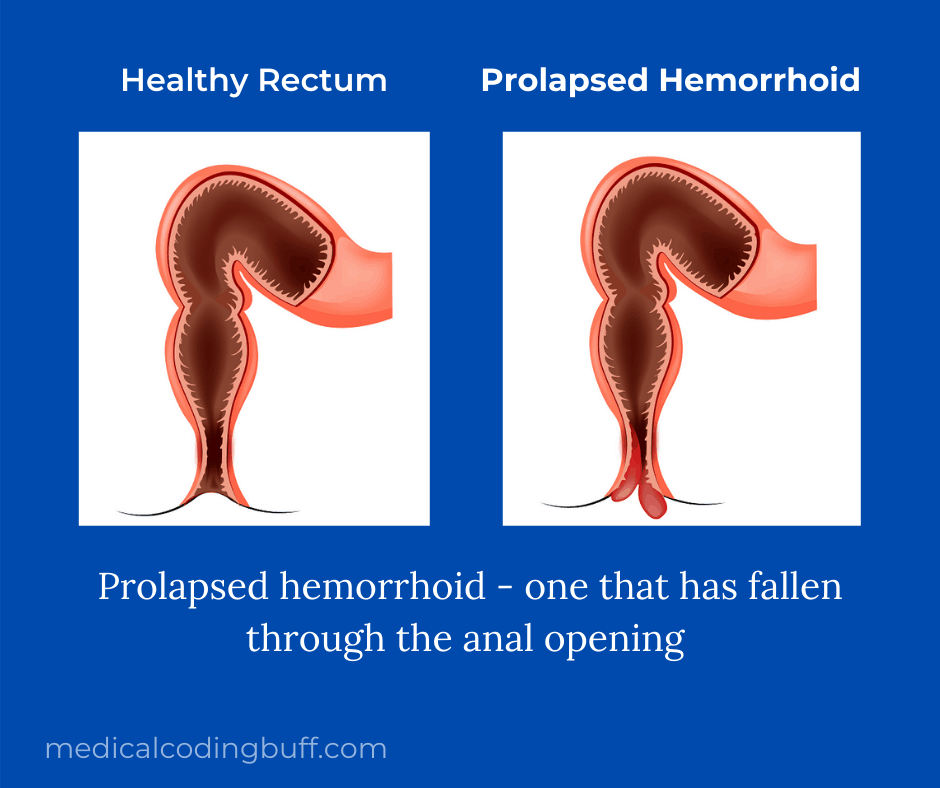 According to the National Institute of Diabetes and Digestive and Kidney Diseases (NIDDK), hemorrhoids are caused by: 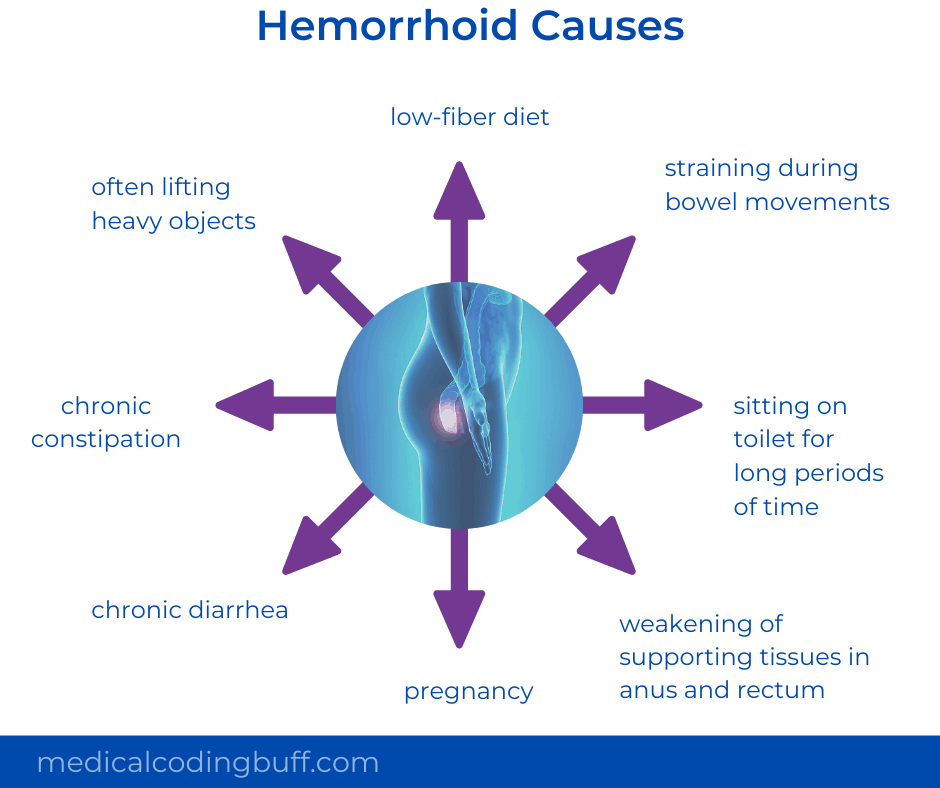 According to the Mayo Clinic, hemorrhoid complications are rare, but when they occur, they include:

Hemorrhoids are often diagnosed by a primary care physician, gastroenterologist, or proctologist during a physical examination. According to the NIDDK, the physician will ask the patient about his or her medical history, symptoms, diet, toilet habits, enema or laxative use, and current health problems.

The physician will perform a digital rectal examination to check:

An anoscopy and rigid proctosigmoidoscopy may be performed to make a diagnosis of internal hemorrhoids. These procedures use different instruments to look at different sections of the colon (large intestine).

Internal hemorrhoids may also be diagnosed during such procedures as a colonoscopy or flexible sigmoidoscopy. These procedures are often performed during a routine examination of the rectum and colon or when other procedures are carried out for other digestive tract problems.

Treatment of hemorrhoid symptoms can generally be provided by a primary care physician. However, a gastroenterologist or proctologist may be needed to handle the more complicated cases.

Codes for hemorrhoids are located in the ICD-10-CM coding manual in Chapter 11. Diseases of the digestive system (K00-K95), block K64, Hemorrhoids and perianal venous thrombosis.

Before making a final code selection from this category, be sure to review the instructional notes at K64. There is an Includes note that indicates “piles” is another term for hemorrhoids.

An Excludes2 note exists that indicates if the patient has any of those conditions listed in addition to the hemorrhoid conditions from K64, they too should be assigned:

To locate the correct code for the hemorrhoid in the ICD-10-CM coding manual Index, look up Hemorrhoids, external K64.4. This code can then be verified in the Tabular as:

A patient arrives for a colonoscopy to determine the cause of his rectal bleeding. The diagnosis is Grade II bleeding internal hemorrhoids and non-bleeding diverticulosis of the large intestine.

To locate the correct code for the hemorrhoid in the ICD-10-CM coding Index, look up Hemorrhoids, 2nd degree (grade/stage II) (that prolapse with straining but retract spontaneously) K64.1. This code can then be verified in the Tabular as:

The patient also has non-bleeding diverticulosis of the large intestine, so this also needs to be coded. Locate the code in the Index by looking under Diverticulosis, large intestine K57.30. This code can then be verified in the Tabular as:

K57.30, Diverticulosis of large intestine without perforation or abscess without bleeding
Diverticular disease of colon NOS

Be sure to review all the instructional notes at K57.3 before making a final code selection. There are “Excludes1,” “Excludes2,” and “Code also” notes provided.

To locate the correct code for the hemorrhoid in the ICD-10-CM coding manual Index, look up Hemorrhoids, external, thrombosed K64.5. This code can then be verified in the Tabular as:

Again, review the instructional notes before assigning the code.

Hopefully, you now have a better understanding of coding for hemorrhoids in ICD-10-CM and know what to look for in the documentation. 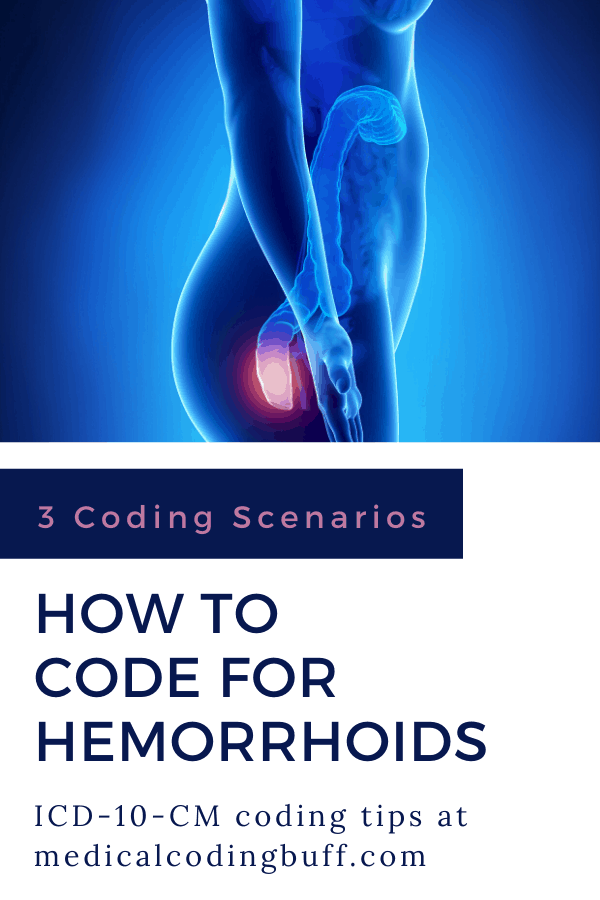