Being stuck in a body that doesn’t seem to fit is not all that unusual these days. Therefore, understanding gender dysphoria and gender reassignment procedures is necessary to correct coding. 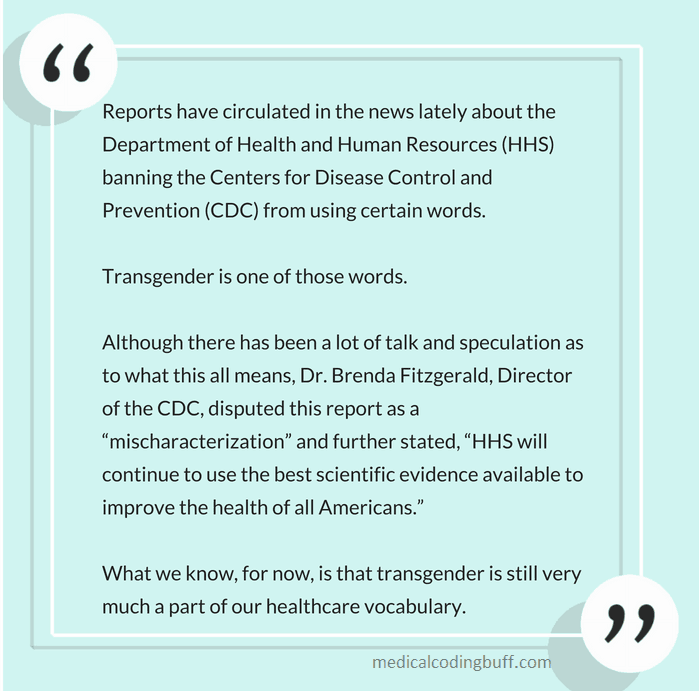 What Is Gender Dysphoria

Gender Dysphoria (formerly known as gender identity disorder) and transgender are terms used to describe a strong, persistent feeling of discomfort in a person whose expressed gender conflicts with the gender assigned at birth.

For instance, a person with the anatomy of a male may actually feel like a female.

Likewise, a person with the anatomy of a female may feel like a male. This can lead a person to desire a body of the opposite gender and to be accepted by those of that gender.

According to WebMD, this feeling of gender mismatch can cause major distress, anxiety, and depression, which can affect a person’s everyday life.

The National Institutes of Health reports that it has often been difficult to determine the number of transgender individuals living in the U.S. This difficulty is due to social stigma, discrimination, harassment, and physical and sexual abuse.

What Gender Dysphoria Is Not

According to the American Psychiatric Association (APA) and the Diagnostic and Statistical Manual of Mental Disorders (DSM-5), gender dysphoria is not considered a mental illness, which is why it is no longer called gender identity disorder. Many individuals consider the former term offensive.

Transsexualism, a severe form of gender dysphoria, is also an outdated term.

Gender dysphoria is not homosexuality. A person’s sense of gender is different than their sexual orientation.

Gender dysphoria is not transvestitism, which refers to cross-dressing.

The cause is unknown, but it is suspected that hormones play a part in the womb.

Symptoms present differently in children than in adults; therefore, the diagnostic criteria for gender dysphoria is different for each.

A child may be diagnosed with gender dysphoria when the condition is experienced for at least 6 months and displays in two or more of the following (according to WebMD):

A teen or adult may be diagnosed with gender dysphoria when the condition is experienced for at least 6 months and displays in two or more of the following: 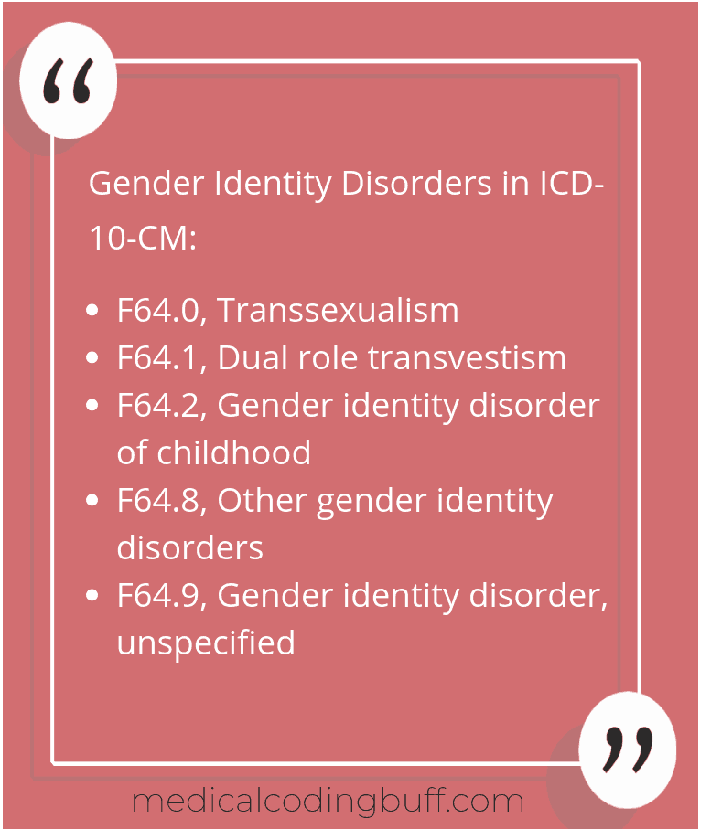 Once the above criteria are met, codes from F64.0-F64.9 may be used to describe the type of gender dysphoria diagnosed:

0 – Gender dysphoria in adolescents and adults

There is also a status code for personal history of sex reassignment (Z87.890), according to Aetna and Tufts Health Plan.

Note that ICD-10 still uses the outdated terms of gender identity disorder and transsexualism. However, changes are coming for ICD-11, and the five diagnoses codes will be replaced by two gender incongruence codes, according to the World Health Organization.

One code will be for adolescents and adults, and one code will be for children. These codes will be found in a new chapter called “Conditions Related to Sexual Health” rather than in Chapter 5 (“Mental, Behavioral and Neurodevelopmental Disorders”) where they currently reside.

Approximately 71% of individuals who go undiagnosed or untreated for gender dysphoria will be diagnosed with other mental health conditions at some point, states WebMD. That includes mood disorders, anxiety disorders, schizophrenia, depression, substance abuse, eating disorders, or suicide attempts.

The goal of treatment is to help individuals with gender dysphoria come to terms with others’ reactions to them. It is not to change how the person feels about his or her gender.

Talk therapy can help, and medications, such as puberty blockers and hormones, can change the appearance. Gender reassignment surgery is also a goal for many who wish to change their appearance. After transitioning, a person may no longer feel dysphoria but may still need therapy to deal with others’ lack of understanding.

Once a person provides the required documentation, gender reassignment surgery can be performed. The individual may choose to undergo breast surgery, genital surgery, or a combination of the two. The decision is based on what is best for the patient.

Genital surgery may consist of all or some of the following procedures: metoidioplasty, phalloplasty, penectomy, vaginoplasty, labiaplasty, clitoroplasty, vaginectomy, urethroplasty, scrotoplasty, or placement of testicular prostheses. Sex reassignment surgery is medically necessary when all of the following criteria are met:

Once the criteria have been met, the following gender reassignment surgical procedures are typically considered medically necessary and covered as a proven benefit:

Many carriers do not allow CPT codes 55970 and 55980 (intersex surgery) to be used on the claim form, and providers must instead bill for the individual procedures performed. Prior authorization is also required before services are provided.

The CPT codes listed below are for informational purposes only and may not be covered depending on the individual’s policy. It is not an all-inclusive list. Once you understand the coverage limitations, the patient can make a decision as to which procedure he/she may want to be performed, and the provider can get the proper reimbursement based on the services provided.

54520 – Orchiectomy, simple (including subcapsular), with or without testicular prosthesis, scrotal or inguinal approach

57291 – Construction of artificial vagina; without graft

57292 – Construction of artificial vagina; with graft

58552 – Laparoscopy, surgical, with vaginal hysterectomy, for uterus 250g or less; with removal of tube(s) and/or ovary(s)

58570 – Laparoscopy, surgical, with total hysterectomy, for uterus 250g or less;

58571 – Laparoscopy, surgical, with total hysterectomy, for uterus 250g or less; with removal of tube(s) and/or ovary(s)

Services that are routinely excluded from coverage and considered cosmetic for the treatment of gender dysphoria may include the following:

Again, the individual’s policy will need to be reviewed to determine which treatments are considered cosmetic and consequently not covered.

Gender identity data should be collected on an ongoing basis, which 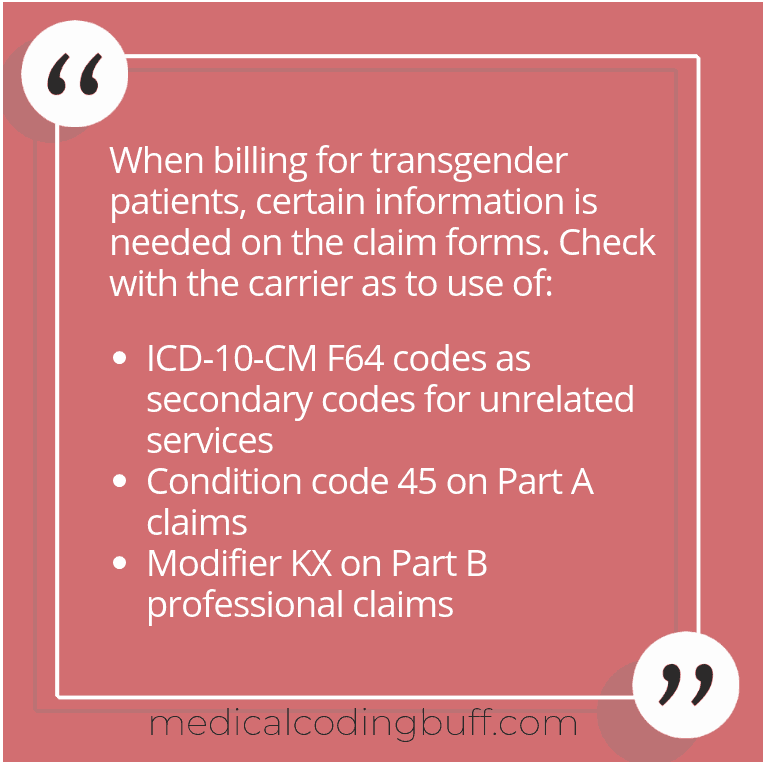 includes both current gender identification and the gender assigned at birth. The gender marker (male or female) should be recorded in the medical record based on the patient’s insurance policy, states AAPC.

Staff should be trained on the best way to collect gender identification. This information is needed so the provider can perform preventive screenings based on the patient’s physical characteristics.

For example, a female who expresses as a man may not have chosen to undergo a mastectomy. This would mean that the individual has the same risks for breast cancer as any other natal woman.

Another example would be that of a transwoman who retained the prostate. If hormones have not been taken, a prostate cancer screening may be medically necessary since the individual would be at risk the same as any other natal man.

Medicare and most insurance carriers require that all Part A claims for transgender inpatient and outpatient services include condition code 45 (Ambiguous Gender Category) in order to avoid being denied. This condition code is to be used by providers to let the fiscal intermediary know that the gender/procedure or gender/diagnosis conflict is not a mistake and that the sex-related edit should be ignored, according to the Medicare Claims Processing Manual.

Modifier KX should be used for Part B professional claims to identify services for transgender patients. This modifier should be appended to the procedure code(s) that are gender-specific for transgender patients. That way if a gender/procedure or gender/diagnosis conflict edit occurs, the KX modifier will alert the carrier that it is not an error and the claim can go through with normal processing. 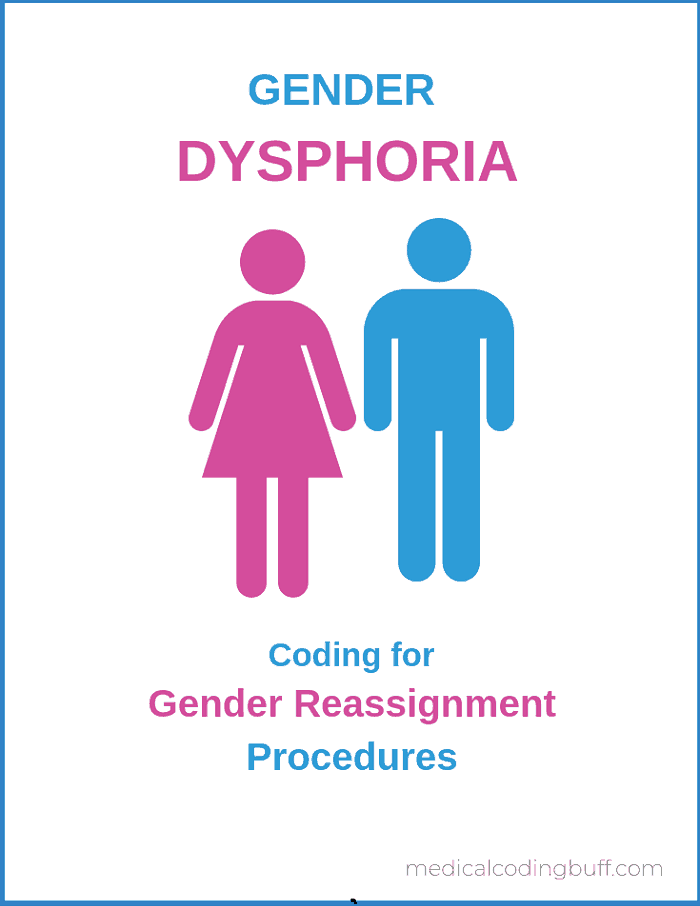 In summary, individuals with gender dysphoria deserve the same unbiased healthcare as any other individual. They do not choose to have this long-term feeling of body and gender mismatch. It is a burden that requires professional and social support. Gender reassignment surgery is only part of the process to achieve positive behavioral and medical outcomes. It is important to review each policy for coverage and limitations, to get prior authorization, and to ensure that medical documentation supports the services billed.

I originally wrote this article and it was first published in BC Advantage/www.billing-coding.com under the title, “Gender Dysphoria and Gender Reassignment Procedures” and is reprinted here with permission.

Previous Post: « A Simple Belly Ache or Crohn’s Disease With An Abscess?
Next Post: Understanding Medicare and Its Different Parts »