A myocardial infarction occurs about every 40 seconds in this country. And because of this high number, it is likely, if you’re a medical coder, you will come across this heart condition at some point in your career. And you will definitely need to know ICD-10-CM coding for acute myocardial infarction for your coding exams. 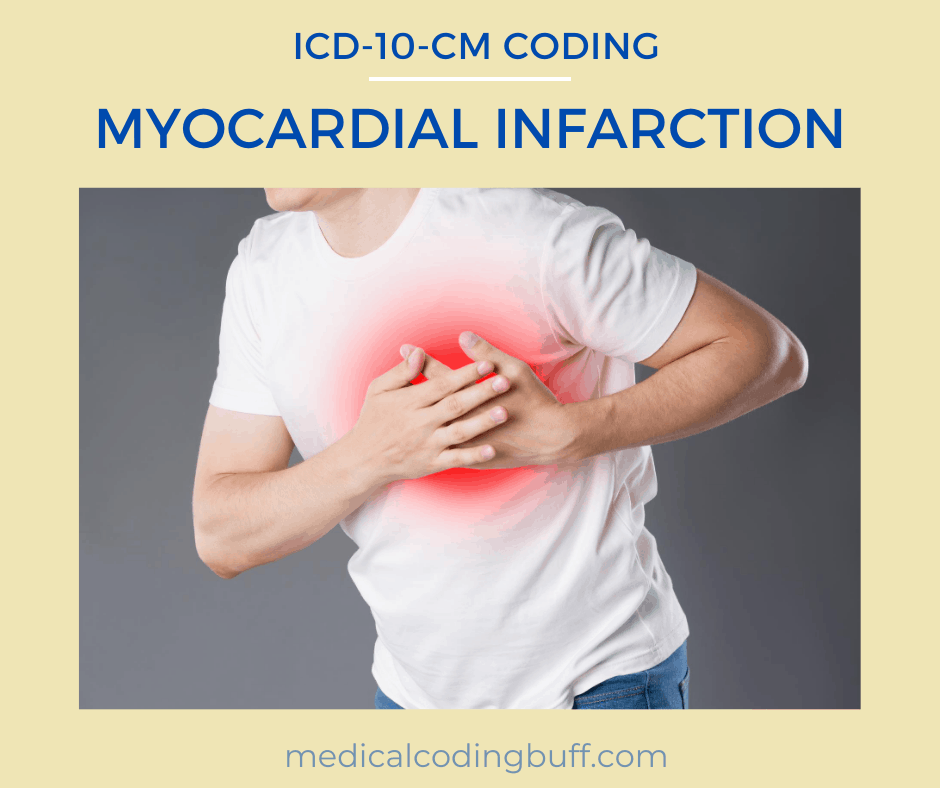 In ICD-10-CM, there are quite a few guidelines related to acute myocardial infarction that we need to know in order to code for it accurately. However, it’s also important to have a basic knowledge of the condition, the different terms used to describe it, as well as the causes, symptoms, and diagnosis.

What Is an Acute Myocardial Infarction and How Common Is It?

According to the National Heart, Lung, and Blood Institute, if an area of the heart muscle goes too long without the flow of blood and is not immediately restored, that area starts to die.

Other names for myocardial infarction and heart attack are:

The Centers for Disease Control and Prevention (CDC) reports that heart disease is the leading cause of death in the U.S. The CDC also provides these statistics as they relate to heart attacks: 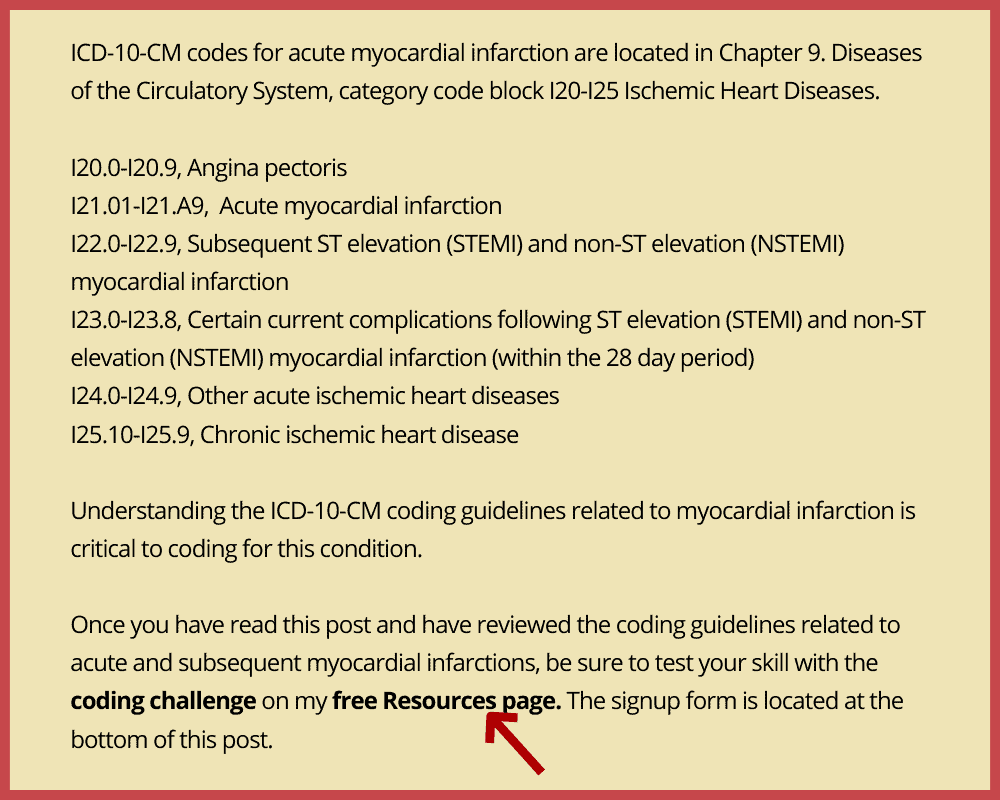 The main cause of most myocardial infarctions is ischemic heart disease. However, some MIs are caused by a coronary artery spasm, but on a less frequent basis.

Ischemic heart disease is a condition that occurs when fatty deposits (plaque) build up on the inside of the coronary arteries over many years. This plaque buildup is called atherosclerosis, or hardening of the arteries.

Eventually, an area of plague can break open inside an artery, causing the formation of a blood clot (thrombus). If the blood clot gets large enough, it can partially or completely block the flow of blood through a coronary artery.

Immediate treatment is necessary in order to prevent the part of the heart muscle fed by the artery from dying (necrosis). Scar tissue replaces the healthy heart tissue, and it may or may not cause serious or long-term problems.

Other names for ischemic heart disease are:

A severe spasm, or tightening, of a coronary artery can occur in coronary arteries that are not affected by atherosclerosis. The spasm cuts off the blood flow through the artery.

The cause of the spasm of a coronary artery  is uncertain, but may be related to:

Myocardial infarctions tend to happen more in men than in women in early middle age. However, once menopause starts, a woman’s risk increases, according to Harvard Health Publishing.

Heart attacks do not always have symptoms, which is why it is referred to as a silent heart attack. When an AMI does present with symptoms, the symptoms can vary from person to another and from one heart attack to the other in the same person. Diabetics may have no symptoms or very mild ones.

The most common symptoms for both men and women include:

Other common symptoms that may occur are:

Major risk factors for a myocardial infarction include:

A physician may suspect a heart attack based on the patient’s symptoms, medical history, and risk factors for cardiovascular disease.

In order to make a diagnosis, the physician will perform the following: 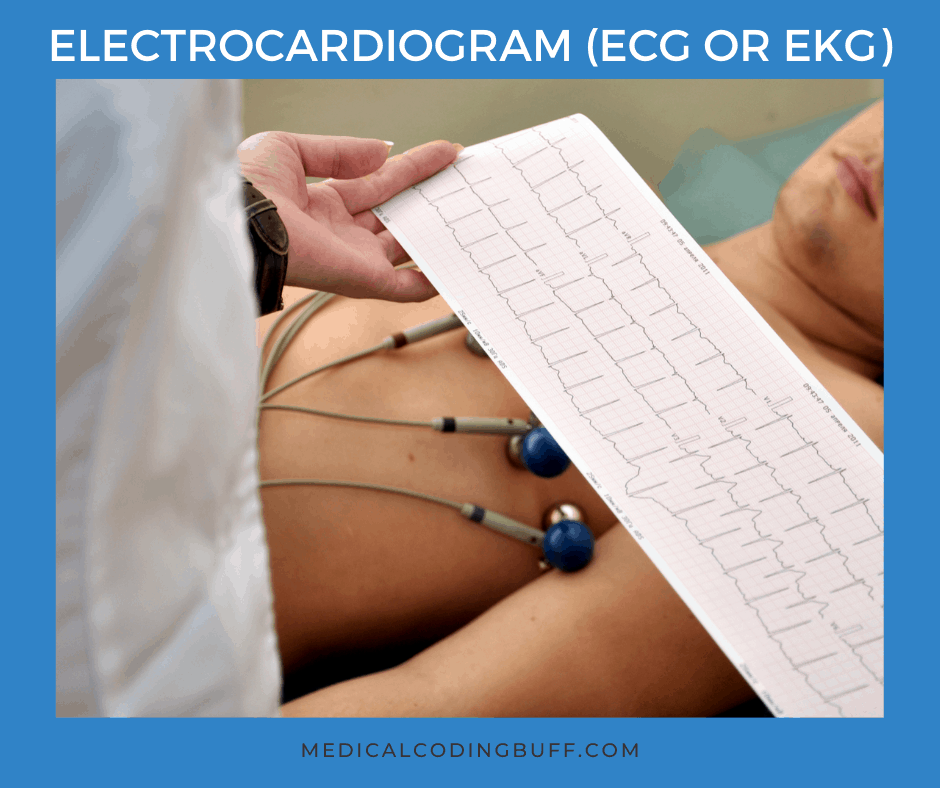 Other tests that may be required include:

There are different types of MI with different underlying causes. The specific type of AMI should be diagnosed as quickly as possible, so the appropriate treatment can begin.

The different types include:

There are quite a few ICD-10-CM coding guidelines (FY2021) pertaining to the circulatory system and myocardial infarctions. Still, if you know the guidelines, what to look for in the documentation, and how to find the codes in your coding manual, your chance of errors is slim to none.

The documentation should provide the site (wall) of the AMI, arteries affected, whether it is initial or subsequent, and the type of AMI. If any of these components are not documented, you may need to query the physician.

An acute MI is a myocardial infarction specified as acute or with a stated duration of 4 weeks (28 days) or less from onset.

Acute MI codes from category I21 include:

Before assigning codes from I21, be sure to review the “Includes,” “Code First,” “Code Also,” “Use additional,” and “Excludes2” notes.

What Is STEMI and NSTEMI?

An ST elevation myocardial infarction (STEMI) is caused by a sudden and long-term blockage of blood supply, according to the Cleveland Clinic. A large area of the heart muscle is damaged due to the blockage and an elevation of the ST segment on the electrocardiogram (ECG) occurs. Changes also occur in the blood levels of key chemical markers. A STEMI, the most serious type of MI, is also called a Q-wave or transmural myocardial infarction.

A Non-ST elevation myocardial infarction (NSTEMI) is caused by a partial or temporary blockage. The extent of the damage to the heart muscle may be relatively small based on the blood supplied by the affected artery. On an ECG, an elevation of the ST segment may not occur, but the chemical markers in the blood show damage. An NSTEMI is less serious than a STEMI and is also referred to as a non-Q wave or non-transmural MI.

Subsequent MI codes from category I22 include:

There are some instructions to review at I22, such as “Includes,” “Use additional,” “Excludes1,” and “Excludes2” notes. Look them over closely before making your final code selections.

The “Use additional” note provided at category I21 and category I22 indicates the following should be coded, if applicable:

Myocardial infarctions can be difficult to code if you don’t know the coding guidelines. Be certain to abstract the pertinent information from the medical record relative to the site of the AMI, arteries affected, whether the AMI is initial or subsequent, and the type of AMI. Finally, read all the instructional notes listed at the ICD-10 codes, including the “Use additional” notes.

Demonstrate your coding knowledge by taking The Coding Challenge. Simply complete the form below. 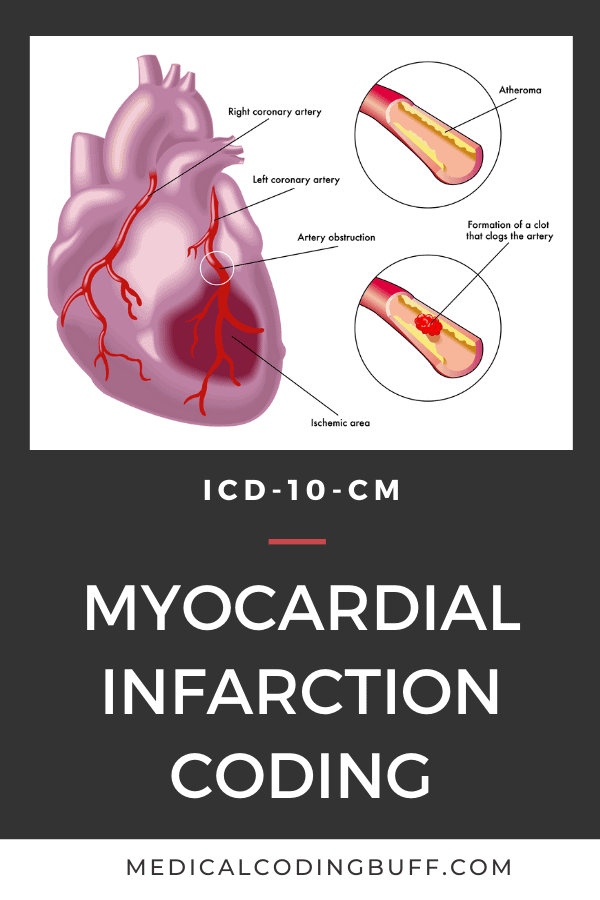