ICD-10-CM codes for vestibular function disorders are located in Chapter 8. Diseases of the ear and mastoid process (H80-H83). Once you understand some important facts about vestibular disorders and how the vestibular system works, abstracting pertinent information from the provider’s documentation will make your coding job for these disorders much easier. 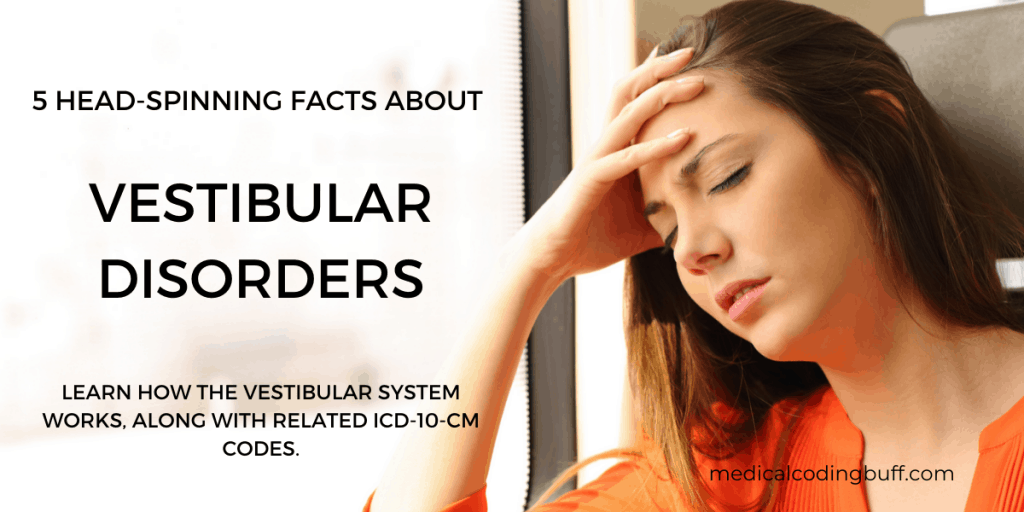 Dizziness, vertigo, and imbalance problems are common symptoms that patients report to their physicians, and the cause is often a vestibular disorder. According to the Vestibular Disorders Association (VEDA), over 35% of adults in the U.S. ages 40 and older have experienced some type of vestibular dysfunction. That is 69 million Americans.

There are also many other potential causes for these symptoms, which can make it difficult for a physician to make an accurate diagnosis. This delay can lead to a lengthy and maddening experience for suffering individuals and their families.

If your head is spinning, it may be due to a peripheral vestibular disorder, a dysfunction of the balance organs of the inner ear. Or, it may be due to a central vestibular disorder. This means there is a dysfunction of one or more components of the central nervous system that assists in processing balance and spatial information.

According to VEDA, the following five important facts explain how symptoms, such as dizziness, vertigo, and imbalance, relate to the vestibular system and vestibular disorders:

Vestibular Disorder or Something Else? (A Personal Story)

Jen is a dear friend of mine who has been suffering from what some physicians suspect are vestibular migraines, a type of vestibular disorder. Still, other physicians believe a brain mass is the cause of her symptoms.

Although you don’t know Jen (not her real name), you may know someone who has experienced similar symptoms. If not, hopefully, Jen’s story will shed some light on the struggles a person might face while in the process of being diagnosed with a vestibular disorder. And it may help you in your medical coding education.

At the time of my original post published on May 20,  2019, Jen was scheduled to have vestibular function testing performed to help her physician diagnose her condition and determine the best course of treatment. She was hoping for a definitive diagnosis and an end to the dizziness she experienced so much of the time.

At the time of this update (January 21, 2020), I learned from Jen that she decided not to have the vestibular function testing performed. She states that she still has dizziness, but the headaches only occur about once a month. She now believes the cause of her symptoms might be hormonal in nature.

A patient with a suspected vestibular disorder, such as benign positional paroxysmal vertigo (BPPV) or vestibular migraine, may undergo an evaluation to determine the health of the vestibular portion of the inner ear and to rule out a brain disorder as the cause of dizziness, vertigo, and balance problems. 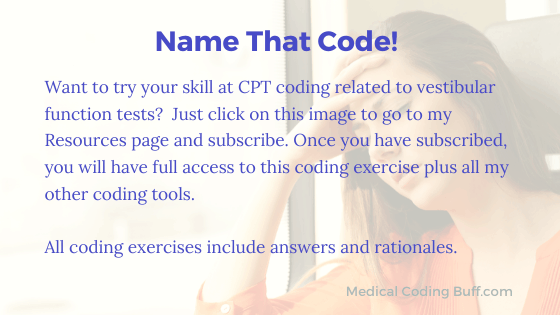 Vestibular System and How It Works

The vestibular system is a special sensory system responsible for maintaining posture, orientation, and balance of the head and trunk, and eye position in relation to head position or movement. This system also communicates with parts of the cerebellum.

In order to understand more about the vestibular system and how a normal system works, we need to start with the ear.

Middle ear is made up of three small bones, the malleus (hammer), incus (anvil), and the stapes (stirrup). The middle ear receives the sound waves from the external ear and, in turn, transfers them to the inner ear. 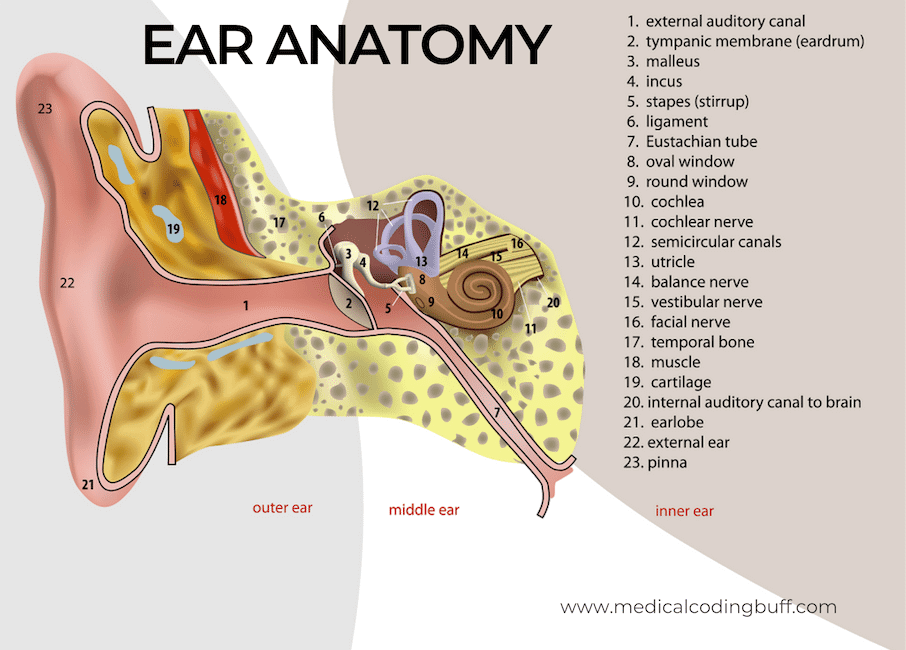 There are two primary components of the vestibular system, which includes the peripheral system (the inner ear and pathways to the brainstem) and the central system (the brain and brainstem).

The peripheral vestibular system is the non-auditory portion of the inner ear that contains three semicircular canals, two otolithic organs within the vestibule, and cranial nerve VIII.

Three semicircular canals detect angular motion of the head in this way: when the head is rotated, it causes fluid in the semicircular canals, called endolymph, to move through the canals and into an enlarged area called the ampulla. According to Neuroscientifically Challenged, the ampulla contains hair cells. These hair cells, called stereocilia, are stimulated by the moving fluid, and this stimulation causes angular movement and bending of the stereocilia. Then neurotransmitters transfer information to cranial nerve VIII. The hair cells are the sensory receptors of the vestibular system.

When linear movement occurs, the otolithic organs are stimulated. This stimulation is caused by the fluid moving in the otolithic organs, leaving behind otoconia, otherwise known as calcium carbonate crystals, or “ear rocks.” These ear rocks cause the hair cells in the saccule and utricle to bend, leading to stimulation of cranial nerve VIII.

To determine if the vestibulospinal reflex is functioning correctly, a person should be able to walk while moving the head in different directions while the body remains stable.

These disorders are reported as:

Chapter 8 includes some parenthetical notes that should be reviewed. They include:

In addition, there is an Excludes 1 note at the beginning of the Disorders of vestibular function subsection which includes:

Be sure to review all the notes before assigning the appropriate diagnosis codes.

A person can experience a few seconds of dizziness, vertigo, or imbalance at some point, but when these symptoms are frequent or go on for days, it could be a sign of a peripheral or central vestibular disorder.

Remember that the vestibular system is responsible for stabilizing the eyes during head movement and for stabilizing the body during head movement. A physician will want to do a thorough evaluation of the patient’s inner ear which may require several different types of tests, such as the vestibular function tests that Jen was getting ready to have performed.

Once certain diagnoses are ruled out and a definitive diagnosis is made, the physician can provide appropriate treatment. 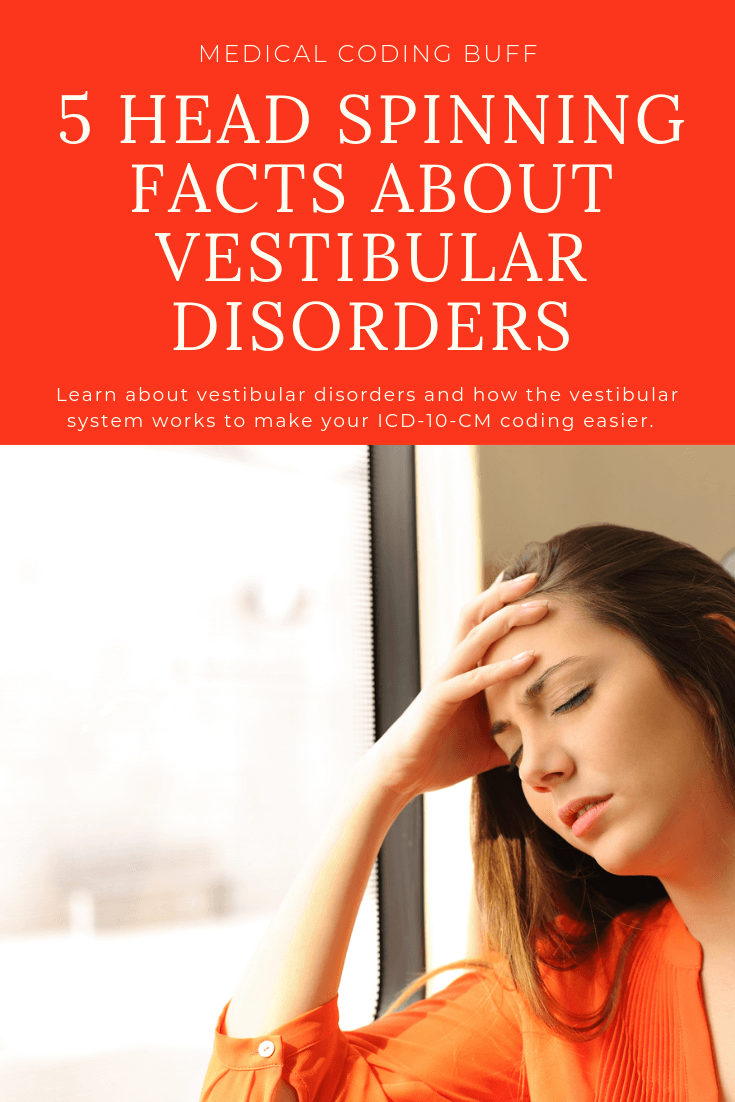 Want to know more about vestibular migraine? Be sure to see my article published by Just Coding, titled, “Avoid compliance headaches: Simplify CPT coding for vestibular migraines.” The article covers the symptoms, causes, diagnostic testing, differential diagnoses, and related CPT coding. A membership is required to access the article. If you don’t have a membership to Just Coding, you may want to consider subscribing, as they have some excellent educational material there to help medical coders.