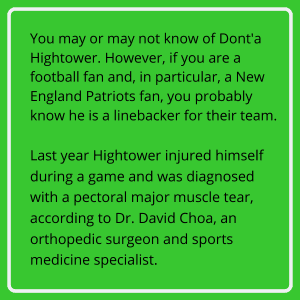 Although pectoralis major muscle tears are rare, they are becoming more common as more individuals participate in physical exercise and high-impact contact sports, such as football and weightlifting.

According to the National Institutes of Health, a review was carried out on 20 patients who had a pectoralis major muscle repair between 2003 and 2011, and the results were as follows:

In October 2019, the Journal of the American Academy of Orthopaedic Surgeons reported that most cases of pectoralis major ruptures occur from indirect trauma in active men between the ages of 20 and 40 years. There have been no reports of pectoralis major ruptures in females from this age group. However, there has been one case of a 49-year-old female who experienced a complete rupture and underwent a successful surgical fixation.

What Are The Pectoralis Muscles?

The muscle fibers of the pectoralis end in a flat tendon, which is inserted into a groove called the intertubercular sulcus, in the upper humerus located in the upper arm.

The pectoralis major controls various actions in order to move the shoulder joint: 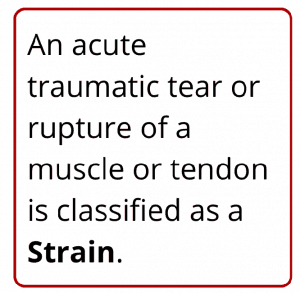 The pectoralis major may tear or rupture in various parts of the muscle, with the most common being a rupture of the tendon off the humerus bone.

The muscle can also tear off the sternum, but this is quite rare.

A patient who has had a rupture of the pectoralis muscle may complain of a sharp tearing sensation. When he attempts to rotate his arm inward and toward his chest (adduction and internal rotation), there will be resistance. The shoulder may also be painful and weak.

On examination, there will be swelling and bruising, palpable effect and misshapen anterior axillary fold, weakness with adduction and internal rotation.

A partial rupture or an injury that basically tears in the muscle may not require surgical treatment. Instead, a sling may be used to immobilize the injury, along with ice, rest, and Advil for pain relief.

If the tendon has been torn away from the bone, surgical treatment is recommended, especially when it involves high-level athletes. An MRI (magnetic resonance imaging) is typically done to make the diagnosis, and the earlier the surgery, the better the outcome, according to the National Institutes of Health.

According to the FY 2020 ICD-10-CM Official Guidelines for Coding and Reporting, an acute traumatic tear or rupture of a muscle or tendon is classified as a strain (think sTrain = tendon/muscle/fascia). A strain may be an overstretched muscle or a partial or complete tear.

These types of injuries are found in Chapter 19 Injury, poisoning, and certain other consequences of external causes (S00-T88). Within this category, injury codes are broken down by body part, type of injury, and, in some cases, laterality.

The episode of care will also need to be reported and assigned as the 7th character to show “A” (initial encounter), ”D” (subsequent encounter), or “S” (sequela).

Whenever possible, you should report the cause of injury, place of occurrence, and activity leading up to the injury. These codes may be found in Chapter 20.

Note: A sprain is different than a strain. A sprain is an injury to a ligament or joint, and codes for strains and sprains are found in two different categories. 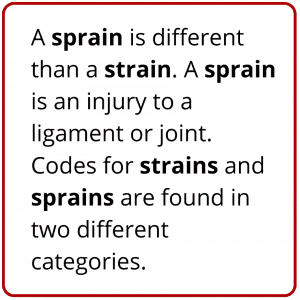 A 28-year-old male presents to the outpatient clinic today with swelling and bruising over the anterior wall of right axilla. Patient is an amateur weightlifter who was performing his routine workout at the gym when he suffered severe pain and tearing sensation over the right side of the chest. He had tenderness, altered anterior axillary fold crease, and limited movement of his right arm. An MRI (magnetic resonance imaging) was recommended due to suspected muscle tear, and he was subsequently diagnosed with tear of tendon of pectoralis major muscle.

When looking up the term Strain, muscle (tendon) in the Alphabetic Index, it refers us to Injury, muscle, by site, strain. Under Injury, muscle, thorax, strain, front wall, it provides code S29.011.

Verified in the Tabular, S29.011 is Strain of muscle and tendon on front wall of thorax. This code is not reportable, however, as there is a note at S29 to add the appropriate 7th character. The patient is being actively treated, so “A” (initial encounter) needs to be appended, making it S29.011A.

There is also a note at S29 to “Code also any additional open wound (S21.-).” In this case, there is no documentation of an open wound.

At S00-T88, there is a note to “Use secondary codes from Chapter 20, External causes of morbidity, to indicate cause of injury.”

Look in the External Cause of Injuries Index under Place of occurrence, gymnasium Y92.39. This can be verified in the Tabular under Y92.39 – Other specified sports and athletic area as the place of occurrence of the external cause.

A note at Y92 indicates “The following category is for use, when relevant, to identify the place of occurrence of the external cause. Use in conjunction with an activity code. Place of occurrence should be recorded only at the initial encounter for treatment.”

A note at Y93 indicates, “These codes should be used in conjunction with codes for external cause status (Y99) and place of occurrence (Y92). Since there is no documentation as to the status, we cannot assign a Y99 code.

Remember that external cause codes are never assigned as a principal diagnosis.

We also need to know that an acute traumatic tear or rupture of a pectoralis major muscle is classified as a strain and not a sprain.

Finally, we should assign as many external cause codes as needed to tell the whole story. 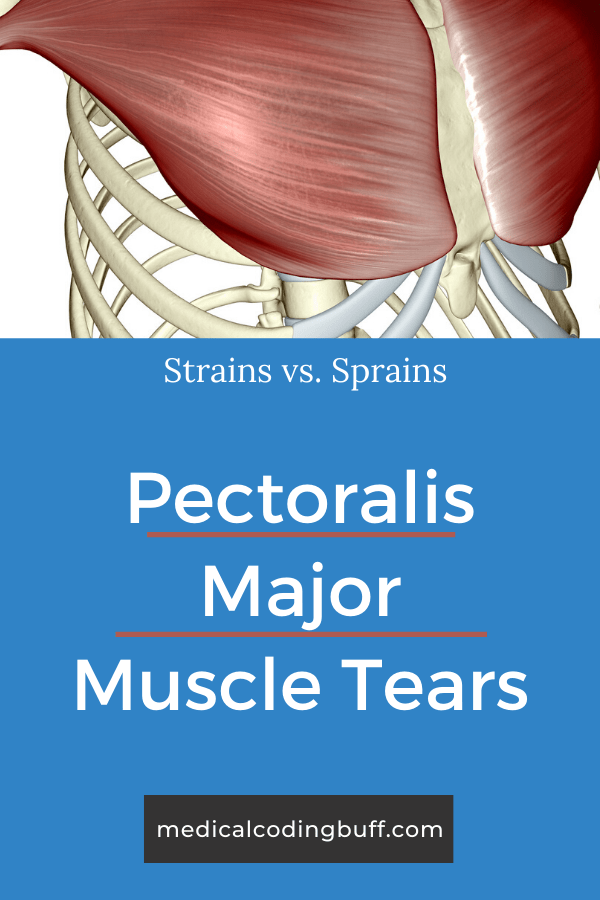 I originally authored this article for BC Advantage/www.billing-coding.com under the title, “Coding for Strains in ICD-10.” It is reprinted here with their permission.