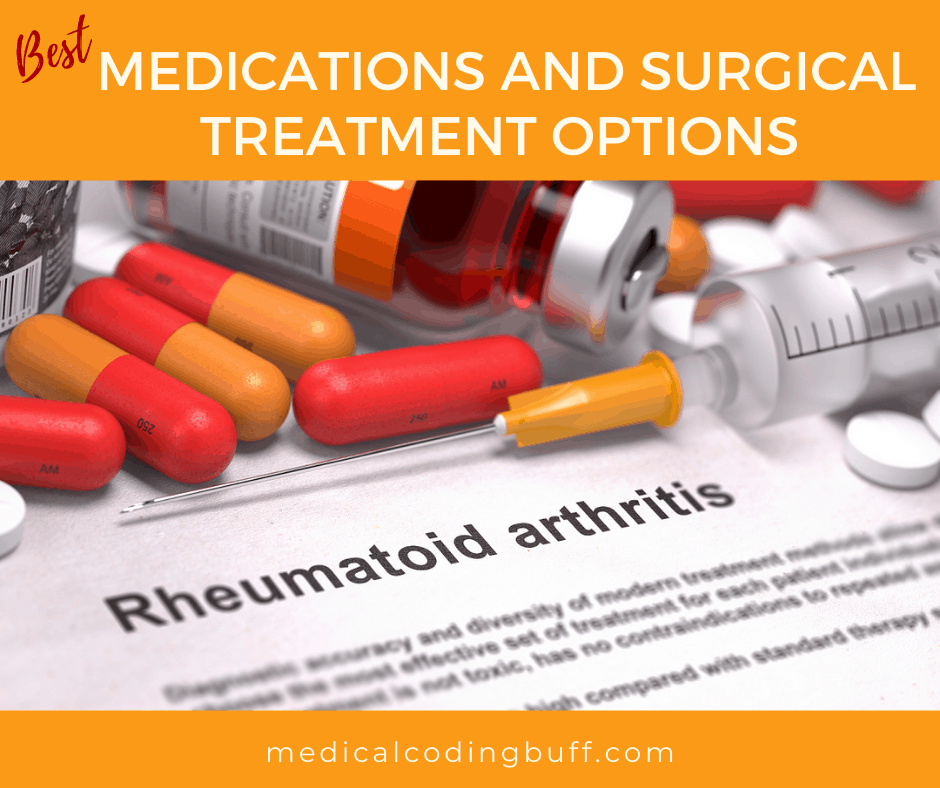 What is the best treatment for rheumatoid arthritis?

The “best” treatment for rheumatoid arthritis, a chronic autoimmune disease that causes problems with the joints, may depend on the specific results the patient and his/her physicians hope to achieve.

Is the goal to relieve the symptoms?

To slow down or stop the disease progression and prevent joint or organ damage?

There have been many changes made in the treatment of rheumatoid arthritis over the past 20 years, and more changes are expected. It used to be that a physician would suggest an over-the-counter drug, prescribe medication, or give the patient a corticosteroid shot. Then they would watch and wait until the RA got worse.

In other words, the course of action was to treat the symptoms rather than the disease itself.

Today, a rheumatologist would prescribe a strong medication right away to stop the disease before major damage occurs.

According to the Arthritis Foundation, the main goals of treatment for rheumatoid arthritis (RA) are to:

According to Johns Hopkins Arthritis Center, there is no known cure for rheumatoid arthritis. However, there are new classes of medications available that improve the outcomes in most patients with RA.

The types of treatment usually include medication, joint stress reduction, physical and occupational therapy, and surgery. Surgery is not performed as often as it once was due to early and aggressive treatment, but it may be needed to correct any joint damage.

Different medications are prescribed for the treatment of RA based on the targeted goal. Some medications relieve the symptoms, while others slow or stop the progression of the disease and prevent joint and organ damage.

NSAIDs, or nonsteroidal anti-inflammatory drugs, help with the pain and inflammation and include drugs such as ibuprofen, ketoprofen, and naproxen. A prescription will provide a higher dose than what is available over the counter, and the results last longer, as reported by WebMD.

Celecoxib is a type of NSAID called a COX-2 inhibitor. Celecoxib may be prescribed for patients with stomach concerns and is taken orally or as a patch or cream directly to the swollen joint.

Corticosteroids include such drugs as prednisone, prednisolone, and methylprednisone to control the potentially damaging inflammation and may be taken orally or by injection into the affected joint. These may be taken to get the potentially damaging inflammation under control while waiting for NSAIDs or DMARDs to take effect. However, corticosteroids may only be taken short term and in small doses due to their potential side effects.

DMARDs (disease-modifying anti-rheumatic drugs) are used to change the course of the disease, traditional DMARDs include such medications as methotrexate, hydroxychloroquine, sulfasalazine, leflunomide, cyclophosphamide, and azathioprine. These medications can be provided in the physician’s office as an infusion, or the patient may take it orally or inject it at home.

Biologics are a subset of DMARDs, biologics often work more quickly than the traditional DMARDs. They can slow down, stop, or change the progression of the disease when other treatments are unable to and are provided in a physician’s office by injection or infusion. Since their objective is to target particular steps in the inflammatory process, they are able to avoid destruction of the entire immune system as some other RA treatments do.

JAK inhibitors are a new subcategory of DMARDs that blocks the Janus kinase (JAK) pathways which are part of the body’s immune response. Rather than a biologic, these are small molecules. Tofacitinib and baricitinib are both in this class of drugs and can be taken by mouth.

Biologics and Other DMARDs are now the first line of treatment. Painkillers, steroids, and multiple surgeries are no longer the recommended treatment of choice. Instead, a rheumatologist will begin with a DMARD at the time of diagnosis, and methotrexate is often the drug provided.

If the methotrexate or other DMARD is not doing a good enough job, the rheumatologist may turn to biologic therapy or recommend a combination of methotrexate and a biologic, such as abatacept (Orencia). Using abatacept in combination with methotrexate may be more effective, according to the American College of Rheumatology. However, abatacept should not be used with other biologic drugs.

Other reasons to switch from a DMARD to a biologic may be the patient is pregnant or may become pregnant, or the patient is experiencing side effects from the DMARD, such as liver problems. In these cases, biologics are safer.

The quicker the treatment is started, the sooner the patient’s joint damage can slow down or put the disease into remission. This results in less pain and stiffness. And by using biologics and other DMARDs, surgeries that were once considered routine can be avoided, and the outcome is much better.

Side-Effects of Biologics and Other DMARDs do exist. Both traditional DMARDs and biologics increase the chances of infections, such as pneumonia. And, although rare, there are other potential side effects based on the particular DMARD or biologic prescribed. These side-effects include:

If the patient has a condition such as multiple sclerosis, hepatitis, or heart failure, a biologic may not be advised.

Fortunately, not everyone with RA requires surgery. It may be something to consider, though, if the RA causes permanent damage that hinders a person’s daily function, mobility, and independence.

The best surgical procedure should be determined by the patient and his/her primary physician, rheumatologist, and an orthopedist. The individual’s goals, rehabilitation ability, and overall medical status will be considered.

Joint surgeries are common in the hips and knees and are also performed on other joints, such as the ankles, shoulders, wrists, and elbows.

There are eight types of joint surgeries performed, according to Arthritis-Health. Nevertheless, the most common types performed in patients with rheumatoid arthritis are joint replacement, arthrodesis, and synovectomy.

CPT codes related to joint procedures are found in the Surgery/Musculoskeletal System section. This section is further classified by general surgical procedures, surgical procedures based on the anatomic site (pelvis and hip joint, femur and knee joint, shoulder, etc.), application of casts and strapping, and endoscopy/arthroscopy procedures.

The individual categories for surgical procedures based on the anatomic site are further broken down by the treatment approach.

Although joint procedures are performed on various joints in the body, for the sake of understanding, we will discuss CPT codes related to the hip joint. This knowledge can then be transferred to coding joint procedures on other body parts.

Surgical procedures on the pelvis and hip joint are broken down as follows:

Hip arthroplasties are reported with codes from the Repair, Revision, and/or Reconstruction Procedures on the Pelvis and Hip Joint category (27097-27187). An arthroplasty refers to the surgical repair of a joint for pain relief, function restoration, or movement restoration. The specific codes include:

The documentation should indicate whether the arthroplasty is an initial procedure or a revision. It should also indicate if it is a total (27130) or partial (27125) replacement and, if partial, the component that is being replaced.

Whether the procedure performed is a total hip replacement or a minimally invasive total joint replacement, CPT 27130 would be assigned.

If it is a conversion from, say, a fused hip (arthrodesis) years ago to a total hip arthroplasty today, it should be documented, and the coder should assign CPT 27132.

Hip arthrodeses are reported with codes from the Arthrodesis Procedures on the Pelvis and Hip Joint (27279-27286) and include:

This procedure has been mostly replaced with the hip arthroplasty. However, it may be done in young people or those who have had an unsuccessful hip replacement. The documentation should specify if the hip arthrodesis included a subtrochanteric osteotomy in order to assign 27286.

Hip synovectomies can be performed as an open procedure or with an arthroscope. An open synovectomy of the hip is considered major surgery and often requires general anesthesia. A medical term ending in -otomy refers to an open procedure.

The CPT code for this open procedure is found in the Excision Procedures on the Pelvis and Hip Joint subsection (27040-27080) and is reported with:

The CPT code for this arthroscopic procedure is located in the Endoscopy/Arthroscopy Procedures on the Musculoskeletal System subsection (29800-29999) and under the Arthroscopy, hip, surgical category (29861-29916). This specific procedure is reported with:

Hip resurfacing procedures do not have their own specific code. According to the  National Institutes of Health and the AAPC Forum, the CPT code for the total hip arthroplasty (27130) should be assigned with Modifier 22 appended to the CPT code to indicate extra work was involved. By using the modifier, the provider is also more likely to receive reimbursement.

Another option is to use a HCPCS code for private payors that accept it:

Finally, there is an unlisted code that may be accepted:

I would check with the individual insurance company to determine their requirements.

Hip osteotomies are, as mentioned above, used mostly to treat hip dysplasia rather than rheumatoid arthritis. The most common type of osteotomy performed for hip dysplasia is the periacetabular osteotomy. This procedure involves the surgeon performing multiple cuts (osteotomies) in the three bones of the pelvis, according to the Denver Clinic.

In CPT, there are many orthopedic procedures with no specific CPT code, and a periacetabular osteotomy is one of them. According to the American Academy of Orthopaedic Surgeons, the following code should be assigned:

Otherwise, there is a HCPCS code that some payors recognize:

2 more things to keep in mind:

1. When coding for orthopedic procedures, it is important to use the appropriate modifiers to show laterality when applicable, such as RT (right), LT (left), 50 (bilateral), F1-F9 (fingers), and TA-T9 (toes).

2. When a physician implants a prosthetic device during a joint replacement, a HCPCS Level II code is also needed: C1776, Joint device (implantable).

Coding for Other Joint Procedures

When coding for surgical procedures on other joints, such as the shoulder or knee, go to the Surgery/Musculoskeletal System section and the respective subsection for that anatomic site.

Looking up these procedures in the CPT coding manual Index is the same process as for the hip joint procedures. Locate the treatment approach first, such as Arthroplasty, and then the body location, such as Ankle, Elbow, Knee, Wrist, etc. This will refer you to a code(s) that you can then verify in the Tabular.

Or start with the name of the joint, such as Shoulder Joint, and then the treatment, such as Arthroplasty. You can then verify the codes in the Tabular. 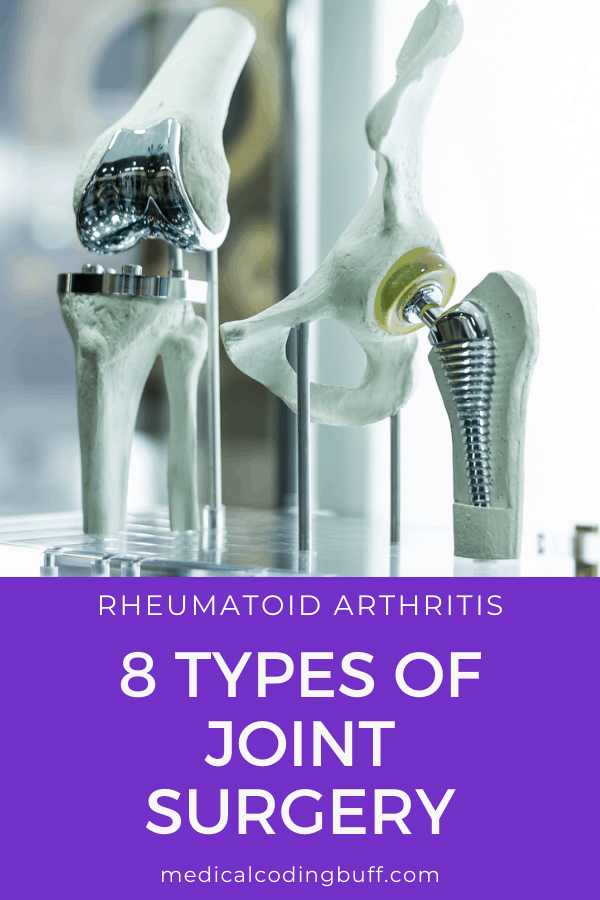 Previous Post: « Rheumatoid Arthritis in ICD-10-CM: It’s All in the Joints
Next Post: Pleural Mesothelioma And Its Treatment Options »