Bertha Guilty: External Cause Code for Bitten By Cow

Have you been gnawed on lately by Bertha or her sister? These girls can be brutal!

And if you had to see a doctor about it, a medical coder may have assigned an external cause code for bitten by cow. This code would help tell the story of the primary diagnosis. 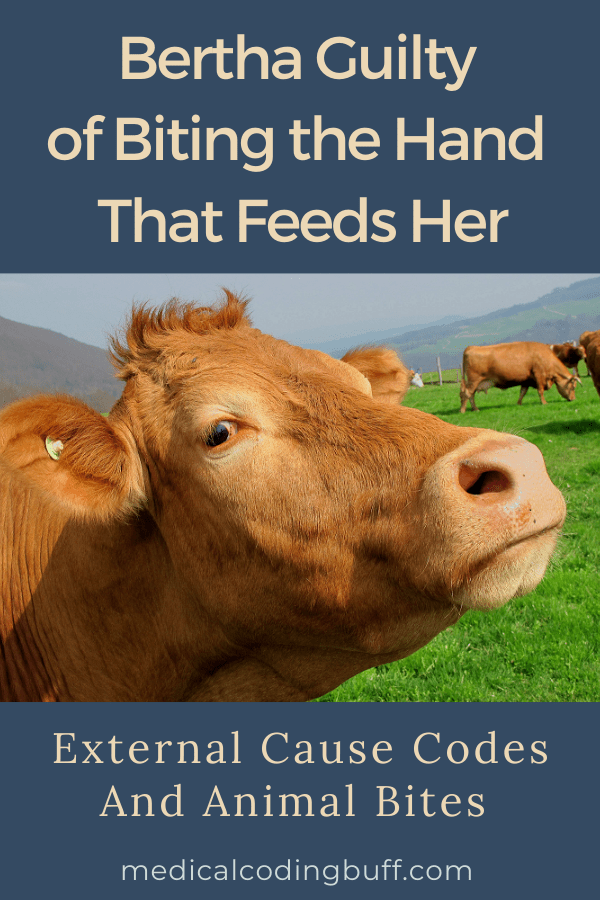 External Cause Code for Bitten by Cow

Yes, it sounds kind of silly. I didn’t even know cows could bite. In fact, I have been told by friends who farmed in my home state of Nebraska that cows don’t bite, at least not as a form of aggression. If someone puts a finger in one of their mouths, however, anything is possible I suppose. And you may need treatment for it.

At any rate, we have a code for it. It’s W55.21XA to indicate the patient was bitten by a cow and it is an initial encounter. The patient is receiving active treatment.

If you are new to the coding world or haven’t had to report it, this may be something you weren’t aware of. This code is considered an external cause code and can be found in Chapter 20 of the ICD-10-CM coding manual. External cause codes start with V, W, X, or Y.

According to CMS (Centers for Medicare & Medicaid Services), codes in ICD-10-CM are built as follows:

Let’s take a look now at the specifics of how W55.21XA was built:

W55: these first three characters indicate the category. W55 is the category for “Contact with other mammals.”

A decimal point is used after the first three characters.

W55.2: the 4th character “2” indicates contact with, specifically, a cow (this code also pertains to a bull).

W55.21X: the 6th character “X” is a placeholder that is needed because this code requires seven characters. Without the placeholder “X,” the code would be invalid.

Locate and Verify the External Cause Code

To locate this code in the ICD-10-CM coding manual, we need to go to the External Cause of Injuries Index and look under Bite, bitten by. Looking at the subcategory cow, it refers us to W55.21.

However, we are not done. There is a note at this code to assign an “X” placeholder (A = initial encounter, D = subsequent encounter, S = sequela). In this case, “A” has been added to the code to indicate it is an initial encounter and the patient is receiving active treatment.

According to the 2021 Official Coding Guidelines, external cause codes should never be sequenced as the first-listed or principal diagnosis. These codes explain how an injury or medical condition occurred, the intent, where it occurred, the activity of the patient at the time of the event, and the status of the patient.