In this post, you will learn all about actinic keratosis and coding for its removal. The symptoms, causes, diagnosis, and treatment are discussed. Furthermore, a coding example with step-by-step instructions is provided to show you how to select the right ICD-10-CM and CPT codes. 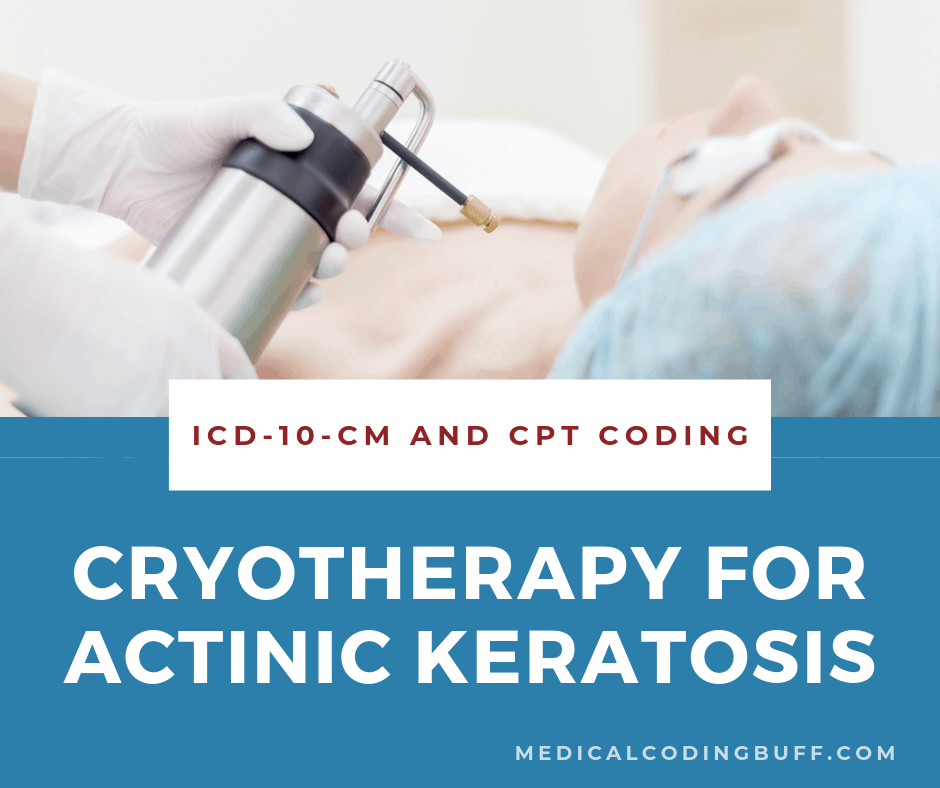 An actinic keratosis (AK), also known as a solar keratosis or a senile keratosis, is a crusty, scaly patch on a person’s skin that develops from years of exposure to ultraviolet rays, either from the sun or from artificial sources such as tanning beds. It is most commonly found on the face, lips, ears, back of your hands, forearms, scalp or neck in people who are middle-aged or older.

There is rarely just one keratosis found, which is why you will oftentimes see the term “keratoses” to mean more than one. According to the American Academy of Dermatology, an actinic keratosis is considered the most common type of premalignant lesion that may turn into skin cancer.

According to the Skin Cancer Foundation:

Actinic keratoses develop when the top layer of skin becomes badly damaged, and this can lead to additional AKs. These lesions may be elevated and resemble warts, and the color can be red, tan, white, pink, or flesh-toned. They can vary in size from an eighth to a quarter of an inch.

And although AKs can take years to develop, the  American Osteopathic College of Dermatology reports that a small percentage of actinic keratoses lesions eventually turn into a type of skin cancer called squamous cell carcinoma (SCC), the second most common type of skin cancer in the United States.

Symptoms that individuals should watch for are:

These lesions can come and go. One AK may appear on the skin and remain for months before falling off and disappearing, and the skin can feel smooth all of a sudden. Still, many AKs can come back again within a few days to a few weeks. Or a person may go outdoors without sun protection, and the keratoses will, in many cases, return. Even if lesions don’t come back, the patient should see a dermatologist.

The ultraviolet damage can occur when a person spends short periods of time in the sun, as well as on cloudy days. Although it may be cloudy, 70 to 80 percent of the sun’s ultraviolet (UV) rays can still pass through the clouds. For those individuals who use tanning beds and sun lamps, the keratoses frequently appear much earlier.

When UV rays hit the skin, the rays damage the skin. The body can repair some of the damage in a young person, but over time, the body is less able to repair it. The effects eventually are UV-damaged skin, which turns into actinic keratoses if the person continues to be exposed to UV rays.

People who live in places that get intense sunlight all year, such as Florida and Southern California, are at increased risk of developing actinic keratosis. As a matter of fact, the closer to the equator one lives, the earlier a person may develop AKs.

People who are more likely to develop AKs have the following traits:

A weak immune system may be due to a medical condition that makes the skin overly sensitive to UV rays. This can occur in a person who works with substances that contain polycyclic aromatic hydrocarbons (PAHs), such as coal or tar. Roofers would be in this group, as they work with tar and spend a lot of time outdoors.

In general, men have a slightly higher risk than women of developing AKs since they tend to spend more time outdoors and use less protection from the sun than women.

Dermatologists diagnose actinic keratoses by performing a thorough examination of the patient’s skin. If the dermatologist detects a thick growth or one that resembles skin cancer, he or she may perform a skin biopsy. This can be done during the office visit. If the physician finds the skin growth early and immediately begins treatment, skin cancer is usually cured. 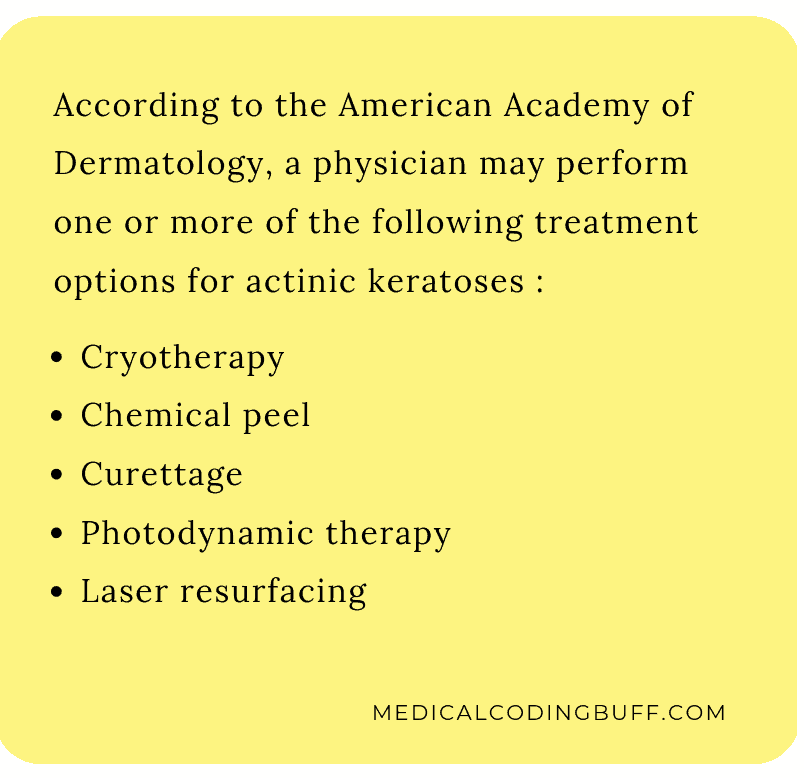 The objective of treatment is to destroy the keratoses, and this can take more than one type of treatment. Fortunately, there are many treatment options available, and some can be performed in the physician’s office. Other treatments can be used at home.

Procedures performed in the physician’s office include:

Because there is no one-treatment-fits-all for actinic keratoses, researchers continue to look for new treatments.

Only a few actinic keratoses may develop in some people, in which case treatment is not always needed. Their AKs clear up on their own.

Be that as it may, people who develop many AKs will need to see a dermatologist. Going without treatment can cause the skin damage to turn into squamous cell carcinoma. If the patient has frequent checkups, the physician can diagnose the skin cancer early and remove it and hopefully cure it.

Some people may need to return for a checkup every 8 to 12 weeks, and others may only need a checkup once or twice a year.

Coding for Actinic Keratosis and Its Removal

A 61-year old female patient presents to her dermatologist today with seven crusty, scaly lesions on her hands and forearms. She spends a lot of time outdoors, mainly working in her gardens, and many times she goes without adequate sunscreen. She reports that she does not use tanning beds. A diagnosis of actinic keratosis is confirmed, and she is counseled on the need for regular use of appropriate sunscreens. Cryotherapy is performed to destroy the seven lesions.

The appropriate codes assigned are:

Finding the correct CPT code(s) for destruction of benign, premalignant, and malignant lesions can be a little tricky. These codes can be found throughout the CPT coding manual in different systems, including the integumentary, female genital, male genital, digestive, and eye and ocular systems. In this case, the correct CPT codes are located in the Integumentary System.

In this coding scenario, we can start by looking in the Alphabetic Index of the CPT coding manual under Skin, destruction, premalignant, 17000-17004. We know that an actinic keratosis is a premalignant lesion based on the information we learned above. In the Tabular, code 17000 can be verified as Destruction (e.g., laser surgery, electrosurgery, cryosurgery, chemosurgery, surgical curettement), premalignant lesions (e.g., actinic keratoses); first lesion. 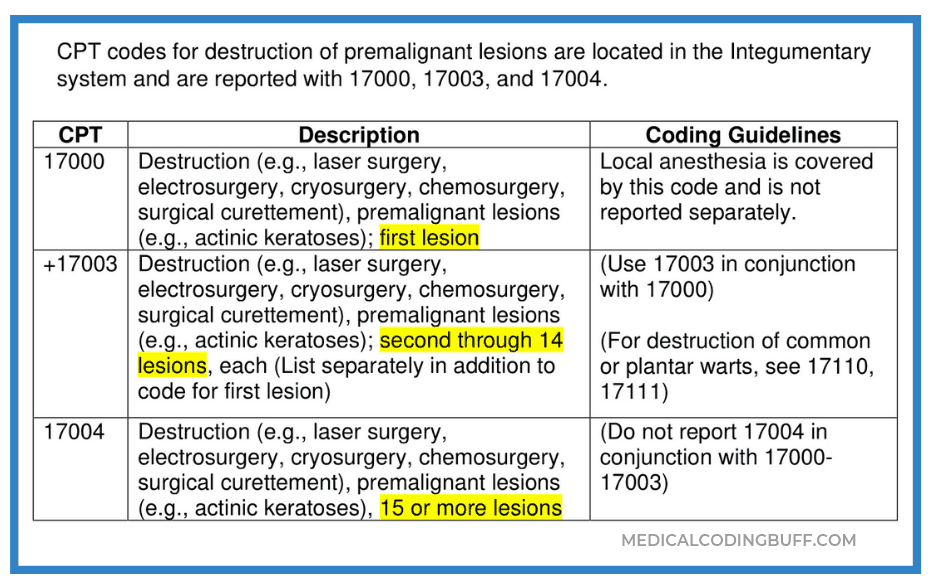 According to the CPT guidelines, “destruction means the ablation of benign, premalignant or malignant tissues by any method, with or without curettement, including local anesthesia, and not usually requiring closure. Any method includes electrosurgery, cryosurgery, laser and chemical treatment. Lesions include condylomata, papillomata, molluscum contagiosum, herpetic lesions, warts (i.e., common, plantar, flat), milia, or other benign, premalignant (e.g., actinic keratoses), or malignant lesions.”

If local anesthesia is used, it is covered by code 17000 and should not be reported separately.

Since the documentation states there were seven actinic keratoses destroyed, we need a code to describe the other six keratoses that were destroyed.

Per the CPT coding guidelines, code 17003 should be assigned for each lesion from the second through the fourteenth. Therefore, we need to report 17003 x 6 for the remaining six lesions. CPT code 17003 is an add-on code and should never be reported alone.

When coding for actinic keratosis in ICD-10, be sure to look at the clinical documentation for the type of keratosis diagnosed and whether it is inflamed. In addition, the location of the growths should be documented, along with any contributing factors such as exposure to a tanning bed. 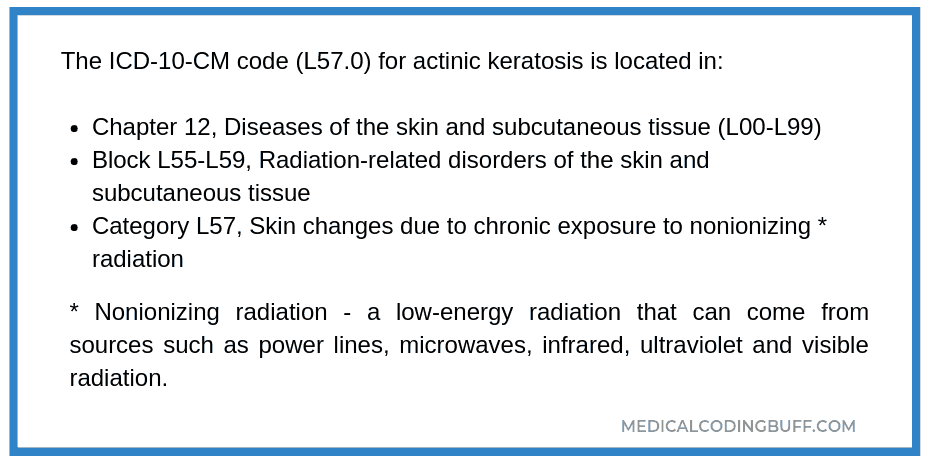 Actinic keratosis is located in the ICD-10-CM coding manual in Chapter 12: Diseases of the skin and subcutaneous tissue (L00-L99), block L55-L59, Radiation-related disorders of the skin and subcutaneous tissue, category L57, Skin changes due to chronic exposure to nonionizing radiation. Nonionizing radiation means it is a low-energy radiation that can come from sources such as power lines, microwaves, infrared, ultraviolet and visible radiation.

There is an Excludes2 note listed at the beginning of Chapter 12, Diseases of the Skin and Subcutaneous Tissue (L00-L99) that states:

Something to pay attention to: There is a note at L57 that states that an additional code should be reported to identify the source of the ultraviolet radiation (W89).

Hence, if the documentation had stated the patient’s actinic keratosis was caused by, say, the use of tanning beds, an additional code would need to be reported from category W89, Exposure to man-made visible and ultraviolet light. There are various code descriptions listed in this category, which include:

W89.1- is the subcategory for Exposure to tanning bed. These codes require a seventh character for the encounter: A (initial), D (subsequent), or S (sequela). In addition, placeholders “X” are required as fifth and sixth characters. 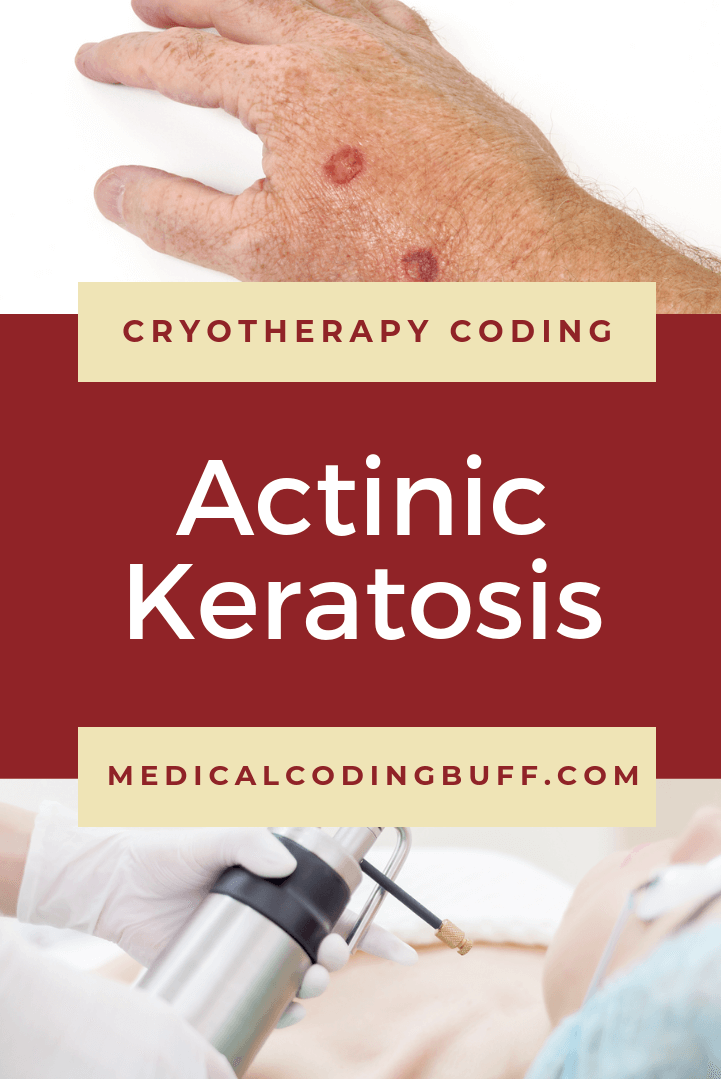 I submitted this article to BC Advantage/www.billing-coding.com for their publication under the title, “Actinic Keratosis – Don’t Let it Turn Into Skin Cancer.”  It is reprinted here with their permission.

We use cookies to ensure that we give you the best experience on our website. If you continue to use this site we will assume that you are happy with it.Ok