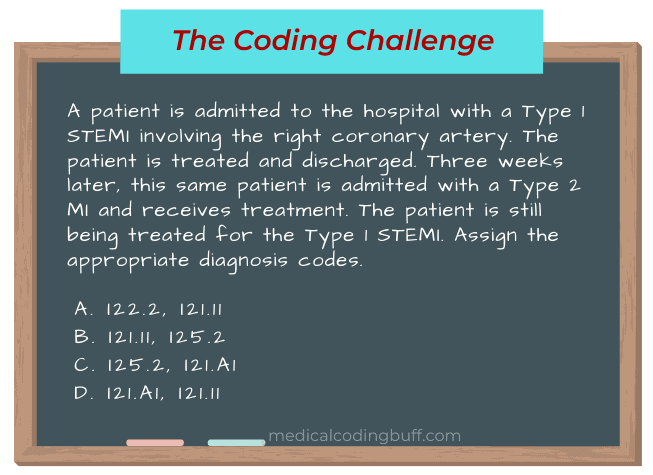 First of all, it’s important to know what these acronyms stand for:

The documentation indicates that both myocardial infarctions (MIs) were treated within 4 weeks of each other. The first MI was a type I STEMI with right coronary artery involvement, and the second one was a type 2 MI.

This code can be verified in the Tabular as:

Be sure to review the “Includes,” “Excludes2,” and “Use Additional” notes before making your final coding selections.

For example, there is an “Includes” note at I21 that reads:

The “Use additional” note provided at I21.11 states an additional code should be assigned to identify:

There is also a “Use additional” note provided at I20-I25 that indicates a code should be used to identify presence of hypertension (I10-I16).

Some of the conditions listed at the “Excludes2” note at I21.11 are:

There is also an “Excludes2” note at I00-I99, which should be reviewed and coded if applicable.

This code can be verified in the Tabular as:

Again, make sure to review the “Code First,” “Includes,” “Use Additional,” and “Excludes2” notes.

The “Code First” note indicates that the underlying cause should be sequenced first, such as:

Just like for the “Use additional” note provided at code I21.11, the following should be assigned here, when applicable, to identify:

The “Excludes2” notes are the same for this code as they are for I21.11. If the patient has any of the listed conditions, they will also need to be coded.

Sequencing of these two codes, according to the ICD-10-CM Official Guidelines for Coding and Reporting (FY 2021), is based on the circumstances of the encounter.

The reason for the second admission was the type 2 MI, which occurred less than 4 weeks after the first MI. Therefore, the type 2 MI (I21.A1) is sequenced first, followed by the type 1 MI (I21.11).

The second MI is not considered a “subsequent” MI, because the coding guidelines state that subsequent MIs are only assigned when both MIs are type 1. (A subsequent MI is then coded to category I22.) In this case, we have one type 1 and one type 2.

I22.2 refers to Subsequent non-ST elevation (NSTEMI) myocardial infarction. (A)

And that’s all, folks!

How Did You Do?

Coding for acute myocardial infarctions can be tricky. But if you know the things to look for in the documentation, it definitely cuts down on the errors.

Things to look for include the location (which wall), arteries affected, whether it is an initial AMI (up to 4 weeks) or a subsequent AMI (AMI occurring within 4 weeks of initial AMI), and the type of AMI.

Also, documentation should include any tobacco use, dependence, and exposure when possible and should be assigned as secondary codes. Post administration of tPA (rtPA) prior to admission and within the previous 24 hours should also be documented and coded, as should any hypertension. If there are any questions, be sure to query the physician.